Don't Read This Book at Night!

April 24, 2018
I absolutely love horror and sci-fi - even better when they're mixed in the same movie, book, or experience! You can find me crocheting like a woman possessed while watching scary movies with my dog and cat. (My husband is nearby, gaming on his computer and laughing when I jump or squeak in fear.)

When I found out that Kody Boye was writing a novel about an alien invasion I was giddy with excitement. He's a talented author with solid world-building and character creation skills. I also know from reading his previous works that he's not afraid to kill off a character - no matter how important the reader thinks they are! 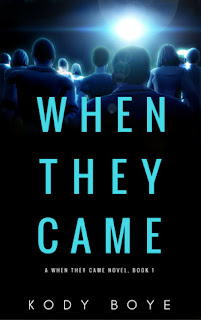 I got my paws on When They Came and couldn't wait to start reading. Kody completely bypasses the lead-up to the invasion and instead drops the reader in the aftermath. Humans are trying to rebuild their society and struggling every step of the way.

The story is centered around the experiences of Ana Mia, a girl who is just coming into womanhood as the story begins. She is graduating from school and has to decide how she will contribute to her society. Against her mother's wishes she joins The Midnight Guard, which is tasked with keeping the aliens out of the settlement, and fighting them face-to-face when necessary. It's dangerous work but Ana Mia can't imagine doing anything else. She has too much hatred for the aliens, since her father was harvested. (Harvesting is the terrifying practice of abducting humans. Nobody has ever come back from being harvested.)

Now, as if this isn't all frightening enough, Kody introduces alien foot soldiers straight out of your worst fever dream. They are like werewolves, but more vicious. (No, I didn't know that was a thing either until reading When They Came!) The reader is introduced to them one night when Ana Mia is guarding the wall, and it gets overrun. Suddenly her world is tossed into chaos and she's forced to fight harder than ever for those she loves.

I really really want to go into more detail but I can't. Part of the greatest fun in reading Kody's novels is seeing what happens next. The obstacles that his characters face are never too fantastical as to be unrealistic, and they're always heartbreaking to the extreme.

I read When They Came on my Kindle, in the dark, and with my trusty little Boston terrier. I absolutely couldn't stop reading. Every page brought more depth to the story, more concern for the character's plight, and more excitement. There are two more stories in the series, and I'm spacing them out a little because I know if I fly through them now, I'm going to be blowing up his social media begging for another installment.

Do yourself a solid favor and grab this series NOW. And, if you're courageous enough, go read it in a dark room while wrapped up in a warm blanket. You'll thank me later!
Bloodcurdling Books