December 31, 2017
Here we are....on the last day of the year. When I was younger, that felt magical. When I hit high school, it just meant the end of the longest break from school for the year. In college I became all about the resolutions.

This year is different. I know I keep going back to it, but the two years since my grandparents and uncle passed have been under more scrutiny than any other time period in my life. Maybe that's because it coincided with my 30th birthday. Maybe it's because my family dynamic changed suddenly. All I know is that this December 31st is vastly different than any other December 31st that I can remember.

This year was a jumble of medical issues (broken finger, infected finger, having strep twice, more fighting with anxiety and depression), and a roller coaster at work. Opening the outpatient clinics, the big Children's Hospital move, and then winding up unemployed.

What I do know for sure is that change will happen. Independent of anything I do, change in inevitable. Knowing that makes the whole idea of resolutions silly. We are never the same people at the end of the year that we were in the beginning. 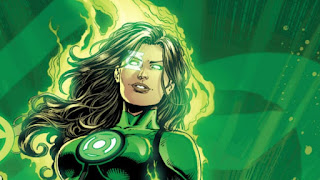 This coming year I want to focus on accepting change more readily. Last night I read Rage Planet, which is the first graphic novel featuring Jessica Cruz. This serves as the intro to the two new Lanterns, and is amazing beyond explanation for someone suffering from anxiety. Jessica's partner, Simon Baz, is unimpressed with Jessica because of her struggles. However, through the course of the book, they come to trust each other and to see that even though flawed, there are reasons why each was chosen to be a Lantern.

I absolutely love the character of Jessica Cruz. She's more than just a superhero. I can relate to her as a human being.

Change will come, whether we want it to or not. The only thing we have control over is how we handle it. This coming year, I am focusing on handling it with grace, optimism, and no small amount of self-forgiveness. I know this won't be easy or immediate, but it feels like a goal worth working towards.

Have a safe and happy New Year, and don't be too hard on yourself. You've got this!