Walking With the Dead

October 16, 2017
All my life I've been interested in the idea of death and its associated imagery. I was absolutely in my glory when I came across Día de los Muertos, a Mexican holiday that celebrates the lives of lost loved ones. Full of skull imagery and bright colors, it felt tailor-made for me. Not to mention, the focus is on remembrance and it does a great deal to take the fear out of death and the uncertainty of the afterlife.

Two years ago, we had a string of deaths in my family during the months of July to December. Within months we lost both my paternal grandparents and my uncle. His wake was held on my birthday. I would love to say that more than anything the imagery of Día de los Muertos gave me comfort. What it actually did was give me a way to express my grief. A starting point for speaking with those who are uncomfortable with the idea of death. Additionally, it allowed me to grieve for as long as I wanted, without public judgement. You see, my crafting room has been sugar skull themed ever since I set it up. (Likewise, when I was a teacher, my room was adorned with several sugar skulls.) 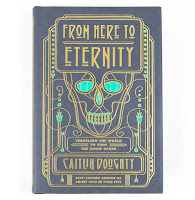 My friend first introduced me to Caitlin Doughty's Smoke Gets in Your Eyes, and I found it an amusing and enlightening way of looking at the death industry. (Take a look at my review here.) When I found out that she had another book coming out, I was absolutely going bonkers until it was released! From Here to Eternity: Traveling the World to Find the Good Death is, as well as being a gorgeous volume with captivating illustrations, a splash of cold water in the face of American death perception. Until reading this book, I had never really thought about what other countries and cultures did with their dead. Literally!

Each segment of From Here to Eternity focuses on a different region, and details her observation of and participation in the death rituals. Insight into the sometimes-baffling rituals comes from Caitlin speaking directly with the people involved. They are surprisingly open about the origins of their rituals and the way they feel about their dead. Caitlin is respectful at every turn, and in her the practitioners seem to find a kindred spirit.

Locales vary from India and Japan to Mexico and Bolivia. The rituals themselves are also varied. Some involve returning the body and the spirit to nature, while other involve keeping the memory of the deceased front and center by visiting the body yearly.

My favorite practice are the ñatitas. In Bolivia, people have dreams where skulls call to them. They retrieve the skulls which are placed in honor in the house, and become an intermediary between the living and the dead. People come and visit the ñatitas to ask favors that they may not feel comfortable asking of the saints. They can ask for protection, financial aid, or help within the home. As Caitlin points out, this is also an important function to this practice. Oftentimes, women are the ones housing, caring for, and petitioning the ñatitas. These women often feel removed from the predominantly Catholic region. The ñatitas give them a measure of control over their faith and a recourse for help when the Church may not intervene.

More than anything, reading Caitlin's books has made me really start thinking about how Americans, myself included, react to death. I have seen firsthand the aversion to grief, the way that people don't know how to comfort someone grieving. The way there seems to be an unspoken moratorium on how long someone is allowed to grieve, or how closely related to the person they have to be for grief to be acceptable. Reading about the practices of these cultures has also confirmed Caitlin's point that our culture doesn't really have many safe spaces to work through grief.

When my grandparents and uncle died, I cried almost nonstop at the funeral home during the wake and the funeral. It was horrible. Antiseptic. Generic. Heartless and soulless. After my uncle's wake we congregated in my grandparent's home, which was in the same city and empty because they had passed a little earlier. The house was riotous with laughter and stories, and the smell of Lebanese food. We passed around pictures and shared memories, sitting on furniture we recognized. In our own space. Our own bubble of shared grief. It's true there were tears, but there was no condescension, no platitudes. I feel robbed knowing that there was an option to have their bodies upstairs in their own beds. Where we could care for them and say our goodbyes on our own. And hold our wake beyond the hours designated by the funeral home. My uncle's wake went over the allotted two hours. It wound up being closer to three, and it was evident that the funeral staff was more than ready for us to leave. I was ready too, because the photographs and mementos of our family history felt out of place in that awful peach-colored room with the borderline 80s furniture. I agree with Caitlin. It's time to take a closer look at how we deal with death, and time to have an honest conversation.

I can't recommend Smoke Gets in Your Eyes or From Here to Eternity highly enough. Whether death scares you or not, and regardless of your religion or lack thereof, these books are thought-provoking. Even if the reader doesn't necessarily change their view of death and the death industry, they're certainly conversation starters.
Bloodcurdling Books