A sequel I couldn't put down!

August 30, 2017
In fall 2016 Suzanne Robb released Dead by Midnight, a clever supernatural mystery set in a town where supernatural beings live with otherwise normal citizens. Robb uses humorous snips from reporter Lucy Lane's articles at the beginning her chapters to introduce readers to the various locations and people in the town. These are very tongue-in-cheek, and absolutely well written. (They are part of what helped to make Lucy one of my personal favorites.)

If you haven't read Dead by Midnight, I urge you to stop reading this post. You're going to spoil a great mystery with fantastic characters. Go and purchase the book (available on Kindle and traditional paperback) and start there. I promise you won't be disappointed! 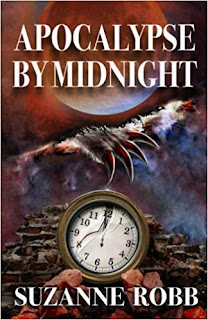 Since you're still reading, I'm going to assume you've read book 1, and are now ready for the sequel.

I really envy you!

Reading a book for the first time is a special experience. Even more so when it deals with a really strange murder mystery. In Apocalypse by Midnight, Chief Elliot Jorgensen, Lucy, Zach, and Buddy are trying their best to get back to a normal life after catching the serial killer in book 1. Zach and Lucy are dating, Sheriff Elliott is drinking heavily and trying to avoid any meetings with the mysterious mayor, and Buddy is enjoying life as an undercover house pet.

Bodies start showing up in strange places around town, and it has the mayor worried. These aren't just any citizens, they've all got ties to the elusive and reclusive Private Acres. Elliot and Zach have to find a way to solve the crime without letting tenacious Lucy get too close. Despite her best efforts, Lucy still isn't in the inner circle of people who know about Fantasy Land, and those who stumble onto the knowledge have a way of meeting a mysterious end. Unfortunately, neither Elliott nor Zach are any good at lying, and Lucy finds her way into the case despite their best efforts.

As if this weren't enough chaos, Zach's friend Riley comes back from a trip as an unconventional vampire. He can't stand rain or molasses, and even though he's dating the woman of his dreams, he has certain...physical setbacks. Lucky for him Gretel doesn't seem to mind. What she does mind is Lucy - whose curiosity is mistaken for an interest in hurting Riley. Zach and Riley are trying to get their friendship back on track, but that's hard to do when Zach realizes goofy Riley may just be the killer.

Gretel's brother, Hans, works security for Private Acres, but he's not overly fond of nosy girlfriends, half-assed vampires, or witches. In fact, the only things he seems to care for are his sister, and anything sugary.

As the mystery of the bodies is unraveled, Zach, Elliot, and Lucy find themselves in a race against the clock. This isn't any regular serial killer mystery - it's only the beginning of a plot that will cause the apocalypse. As if that weren't hair-raising enough, just when the group needs each other the most they begin to splinter off into factions, driven by an unnatural paranoia.

I was on the edge of my seat while reading Apocalypse by Midnight, wondering if the group would get it together in time to solve the mystery, or if the apocalypse was all but unavoidable. Not to mention - just what kind of monster leaves such a strange crime scene?! I thought I knew the habits of every kind of monster out there, but Robb has one again created a delightful surprise for the reader.

If you had asked me a couple of years ago if I was into mysteries, I would have told you no. That's no longer the case. The By Midnight series is, in large part, what has changed my views. I've started branching out into other mystery books, even when there is no supernatural element. I can think of no greater compliment for an author than that reading their books has opened up new avenues for the reader. Getting me to turn from supernatural and horror stories is no small feat, but Suzanne Robb has accomplished just that. The mystery elements and plot twists in her story were so satisfying that I didn't want the story to end, and I am pleased that she is keeping the series open to more titles in the future. (On a side note, if, like me, you can't get enough of wily Lucy Lane after reading the series, you can follow her adventures in between books at All Things Strange and Unusual.)