June 28, 2017
I have always had a bit of a thing for the macabre, whether it's creepy old buildings, abandoned cemeteries, or dusty old antique shops. I'm also interested in the history of mental heath care, which at times has more closely resembled torture than treatment.


When Dipper sent me a link to The Order of the Good Death, I was intrigued. Through The Order, Caitlin works to bring a better understand of death to people. She is a proponent of making death a more natural part of our culture again, instead of it being cold and distant. Caitlin believes that if the family has more involvement in the funerary process, it helps the grieving process, and allows us to take an honest look at death and dying. Unfortunately it's an experience none of us are going to avoid. 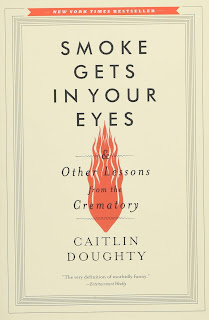 Smoke Gets In Your Eyes is an account of Caitlin's first experience with death and the way it shaped the woman she would become. She writes about how she became part of the funeral business. When she first starts out, her ideas of a more commercialized, and almost candy-coated funeral home are well-intentioned, but not necessarily practical. As she gains more experience in the field and insight into the ways in which we mourn, she eventually comes to believe the direct opposite. Caitlin becomes an advocate of family involvement, believing that it's healthier to confront death as a natural part of life. Having experienced three funerals close together a year ago, I can completely understand where she's coming from. Spending time taking care of the body and preparing it for burial or cremation is a very intimate process.

She also explores different death rituals from other cultures and time periods. Rituals like mummification weren't just done for the hell of it, but had meaning for the people involved and the community as a whole. Caitlin points out that over the last few decades we as a culture have developed a deep phobia of death, and have driven to make it almost impersonal. She also advocates exploring more than just the standard burial or cremation. There are now other options such as turning your cremated body into the container for a tree seed, or the pros and cons of donating your body to science. She also points out on numerous occasions about the damage done when we turn our backs on the natural process of dying.

While all of this may sound purely clinical, it's a frank and intimate discussion about death, written by a witty and insightful narrator who has personal experience in the field. She also livens up her narrative by interjecting stories from her own career, be they humorous or sad. It's well worth looking into both her book and her website.

On her website, under Death Positive, you will find a pledge you can sign if you wish to become part of the Order. It's not a gimmick or a plea for funding. It's an 8 point summation of the ideas of Death Positive, and The Order of the Good Death in general. If you're wondering, yes, I signed the pledge. I agree with Caitlin - death is not something that should be hidden behind closed doors or pushed out of the cultural consciousness. It's part of the natural balance - we are born, we grow and live and experience, and then we die. Asking questions about death should be encouraged, and we should work as a society to dispel the disinformation surrounding death and it's processes.

I can't praise Smoke Gets in Your Eyes enough. Caitlin is a solid writer who, pardon the bad pun, is attempting to breathe new life into our perception of death and dying. She is by no means disrespectful, and clearly has spent time researching her subject to the point of mastery. I am looking forward to her new book, From Here to Eternity, which will be released on October 3, 2017. If you're interested in hearing her speak, check out the website. There are speaking engagements on the West Coast (which I would give my right thumb to attend!)
Bloodcurdling Books


Now, I know what you're thinking.  Yes this is a media review site.  However, this book is fairly important to me because it was what got me to start learning to crochet.  I was searching for "Cthulhu" one day when I was bored and I came across "Creepy Cute Crochet" by accident.  I went out and bought it the same afternoon (you should have learned by now that I am in impulse buyer of zombies, and anything book related.)

The patterns are ranked in terms of ease, but since I'm still a beginning I haven't done any of them yet.  The patterns are really nice and cover tons of ground with regards to the subject matter.  There are even wizards, Trojan warriors, and Amazonian women to crochet.

This book is a must-have for any crafty zombie lover !  In fact, I was perusing another blog and found out that windgie79 at craftster.org …
Read more