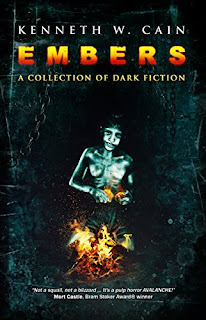 Back in 2014 I had the pleasure of reviewing These Old Tales by Kenneth W. Cain. It was an anthology of his dark fiction. I still remember the tale of the man whose life is too good to be true, until he finds himself in a Chinese buffet run by a very shady proprietor. Every time I see shrimp at the grocery or on a menu, I hear "irucky shrimp!" in my head and I shudder. Suffice to say, Cain's stories have a way of staying with you long after you've read them.

Which brings me to the subject of my current review. When I heard that Cain was publishing another anthology I couldn't wait to purchase it. Previously I had read his works on my Kindle, but this time I was bound and determined to get myself a copy I could hold in my hand. I ordered Embers: A Collection of Dark Fiction off Amazon as soon as I was able. When it arrived I held it as close to my face as I could in order to see the intricate detail of the cover. Laugh all you want - it's true. The cover, like so many of Cain's stories, is frightening in it's subtlety. The tiny red glowing eyes of the child and the setting which evokes thoughts of a catacomb. Truth be told, I'm not sure I've come across Ben Baldwin's cover artwork before, but I will be on the lookout going forward. It compliments the stories within the book extremely well.

From time to time I have found that when an author writes their own anthology it can be problematic in that the stories start to take on a formula. Cain defies this monotony by switching the perspective his stories are written from as well as their settings. Every story is unique but fits extremely well within the whole. There are several that I can tell will be staying with me for some time. Cain also varies the monsters in his stories. I was surprised when reading that a few of them were from the perspective of the monster itself, and often it can be debated who really should wear the mantle of "monster". The human characters aren't always the most horrifying and evil in the stories. The only aspect of Cain's work that could be considered formulaic is that he enjoys leading the reader in one direction and then completely ripping the figural carpet from their feet. Rather than being disorienting or annoying, this tactic is one of my favorite aspects of his writing. Cain's stories are interactive, in that I'm always guessing who the narrator and characters are and what the surprise will be. I can say that with Embers I never guessed correctly. I came sort of close in the story "The Bad Men" but I wasn't quite on the money.

I loved Cain's work back in 2014 and didn't think it could get much better. I was delightfully wrong! Cain has honed his storytelling to a razor-blade precision that cuts deep every time. He's more confident in his storytelling and it shows in that he's willing to go even further into the odd and unfamiliar in order to scare his readers. Back in 2014 I compared his writing to The Twilight Zone. I almost would have compared it to Tales from the Darkside, but I think even that isn't really getting to the marrow of the matter. Cain is in a class of his own. His stories are short, wickedly clever, and have a way of burrowing into your mind.

As a reviewer, I would be totally remiss if I didn't speak to the quality of his characters. Cain doesn't need to go in-depth describing every facet of his characters. Most of the time he lets the characters speak for themselves through their actions and choices. From the tiniest human to the most tentacled being, all of Cain's characters are relatable and so realistic you can't help but become immersed in their stories. One of my favorite characters is Boris, the anxiety-riddled bystander in "To Save One Life". He knows the identity of a heinous killer and wants desperately to step in, but he's not sure how much he can do to save the victims. The reader watches helplessly as Boris tries to figure out some method of intervention, and it's impossible not to feel for his distress leaking off the page.

The girl in "Valerie's Window" faces a terrible dilemma. If she leaves the safety of the house in which she hides, she risks being eaten by the undead. However, the house isn't as safe as it should be, and she has a difficult choice ahead of her. Cain goes beyond the usual trope of being trapped with nasty people during the apocalypse to bring a multi-layered and heartbreaking story to life. I had to re-read parts of it because I couldn't help but hope that I was wrong in my assumptions. I was correct, and I don't envy the girl her choices one bit.

His story "Soul Tapped", about a man named Henry who lives in a nursing home reminded me of one of my favorite movies. Like Bruce Campbell's character in Bubba Ho-Tep, Henry is up against a supernatural foe that is hell-bent on killing. Henry tries to stop it, and in so doing finds out a truth more awful than he could have ever imagined.

For those who love a good Lovecraft story, there's "The Water People", in which a man spends his life researching the myth that there are tentacle beings inhabiting Chesapeake Bay. As is usually the case in these stories, he is proven correct with disastrous results. Cain's parting shot, however, will leave your jaw swinging and your mind spinning. It's anything but the usual fare.

Cain's characters are anything but black and white. They are as multi-faceted as any real person you know. They are presented with difficult decisions and even worse situations, and they do the best that they can. Monster and man both are tested relentlessly, Cain never taking the easy way out. Some of the stories are predominately scary, some are predominately sad. All of them will evoke a range of emotions while you read and long after you've finished.

I can't recommend Embers: A Collection of Dark Fiction highly enough. Normally I wait until I am done with a book before putting up a review, but I couldn't wait. I have to finish "Parasite", which is visceral, nasty, and totally engrossing. (And, it might be mentioned, somehow I've found up eating while trying to read this story three times, having lost my appetite every time!) Then read "Strip Poker, Crabs, and Blue Women", "The Benefit of Being Weighty", and the "Afterword" by Cain, and I will be finished. In many ways I wish Embers would never end because it's so damnably enjoyable. However, considering Cain seems to enjoy these anthologies of dark fiction, I am hopeful that there will be many more volumes in the years to come.

If I may make one last suggestion, if you like what you've read in this review, not only should you pick up Embers, but his other books as well. You can find a full listing at his author site here, and it's worth noting that he writes several types of books. He has offerings for middle grade, youngsters, and the seasoned horror reader just to name a few.