Not All Who Wander Are Lost

April 07, 2017
Since I am generally more of a horror fan than anything else, I admit that I miss out on great works by authors in other genres. Some months ago, there was a call for reviewers for an upcoming book by Scott Oden. I had never heard of him before, but Adrian Chamberlin (whose work I am extremely fond of) gave me the head’s up. I read the brief summary of the book and was immediately intrigued by the little I read about A Gathering of Ravens. 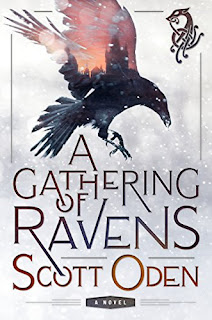 I responded to the call for reviewers, and was placed on the list. When the book arrived, I was extremely impressed. A Gathering of Ravens is a solid book, clocking in at 336 pages, and I found that there was nothing I would have cut out of the book. On the contrary, I would have added more to it in the form of a series, but that’s me being selfish. I didn’t want A Gathering of Ravens to end!

My apologies upfront, I will not be getting very in-depth with the plot summary. Oden packs many surprises and twists into his story, and I don’t want to deprive any readers of the joy of discovering those twists for themselves. The story begins with a young monk travelling to a monastery, guided and protected by a great warrior. They shelter for the night in a cave, coming face to face with a fierce skraelinger. (Fantasy fans might be more familiar with the term “orc”.) The skraelinger is none too happy to have anyone in his cave, even for a night. He allows them to stay, with the understanding that they will be gone come morning. When morning comes, things are not as cut and dry as they had seemed the night before, and the real journey begins.

As the reader continues, it is revealed that the story really belongs to Grimnir, the skraelinger. His quest for vengeance overtakes any other storylines and becomes the driving force of the story. His brother was murdered many years ago, and Grimnir had sworn to avenge him. Not only will Grimnir go to great lengths to make good on his oath, but everyone around him will be drawn into his quest, whether willingly or not.

A Gathering of Ravens is an amazing book. I was really upset when it ended, because there is, as yet, no announcement of it becoming a series. Oden is masterful in deceiving his audience. I was pleased to see the main character shift to Grimnir who is not likeable in a traditional sense, but has his own honor and code that he lives by. I have to admit that Oden threw me for a loop. At first he seemed to deal disrespectfully with the young monk’s Christian faith, but as I continued, I realized that much of what he wrote mirrors history. It’s no secret that the Crusades were a less than holy undertaking, no matter what they were intended to be. Oden also weaves in a deep respect for nature worship, and eventually shows that the two can co-exist and that a belief in both is no conflict. Don’t misunderstand me – Oden is in no way preachy. However, he is deft in terms of weaving the character’s various faiths and superstitions together. If anything, it adds to the three-dimensionality of the characters. They become all the more real because they are complicated, unpredictable, and a mesh of their various influences and cultures.

Oden is a master world builder as well. There are many places where it is difficult to tell if the events are real or fake. The locations in the story vary, from the very real England, to the mythical Yggdrasil, or World Tree. It doesn’t matter where the characters are, the setting always seems real.

The supporting characters are also well written and complex. There are no superfluous characters, and all of them are more than just a vehicle to move the plot along. Oden also manages to drop hints about the character’s pasts and influences, so that the reader seamlessly gets a feel for who they are without being tossed out of the action of the book for a “backstory session”.

Overall I am very impressed with Scott Oden’s A Gathering of Ravens. It’s an amazing work of fantasy with a very real touch of both humanity and the weight of history. While reading it, I lost many hours of sleep because I didn’t want to put the book down. Oden has populated his strange world with witches, monsters, Vikings, warriors, cowards, and everything in between. It’s safe to say he’s gained another fan after writing this book!
Bloodcurdling Books