A Strong Start for an Amazing Series 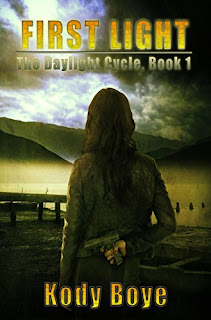 I recently read Kody Boye's First Light, and I absolutely loved it. It's book one of The Daylight Cycle series. (I'm currently reading book two - and whoa! Does he amp up the scares!) The central characters, Rose and Lyra, are flatmates in England. It's Lyra's home country, and Rose's adopted country. They are typical college best friends, and their third flatmate Mary is the overly dramatic third musketeer.

The zombie takeover is well underway when First Light begins, although nobody knows that quite yet. The news stations are using words like "riot" and "civil unrest" to describe the outbreaks of violence in major cities. Rose and Lyra are worried that their proximity to an airport will cause them to encounter the violent protestors. Only a few pages into the book, Mary stumbles into the flat bawling her eyes out and bleeding. Apparently her on-again off-again boyfriend not only proposed, but proceeded to bite her. The girls hear a terrifying screech from the hallway while they are trying to calm down their hysterical friend. Moments later her boyfriend throws himself against the door and claws his way in. For Lyra, Rose, and Mary it's a battle to the death. And it's only the beginning.

As the story progresses, the girls find themselves in a variety of situations that they had no way to be prepared for. Including floating on a boat that neither of them knows how to sail, and fleeing from a country that's using deadly force on anyone looking for asylum. Neither of the girls can really blame the country, because by then they know it's a virus that spreads through bites and scratches.

First Light is an amazing book, but I'd be hard-pressed to tell you what exactly about the book is my favorite. Kody's apocalypse is all too real. The freshly dead run, the long dead shamble. And the girls are forced to survive by whatever means they can.

I also really love how Kody portrays the friendship between Rose and Lyra. They're incredibly real. They argue over what the best course of action is, and where they will be safest. They wind up eventually talking out their points of view, and though they have their rough moments, they are always fiercely loyal to each other. They are strong in their own ways, but also show their weaknesses.

The end of First Light finds Rose and Lyra making a choice that will affect them for the rest of their lives. Rose doesn't believe they are safe in their current location, despite fortifications. Lyra, however, doesn't believe that they are any safer outside the walls. The decision is a heavy one, and could possibly split them apart for the rest of their lives.

First Light is an amazing read from start to finish, and showcases Kody's unique writing style. I recommend this book (and series!) to anyone looking for a solid story with relatable characters, realistic situations, and a helluva scary zombie element! (If you like what you read, I'd also recommend checking out his other books. He writes more than just horror!)