April 18, 2017
Disclaimer: I pride myself on being an honest reviewer. In that vein, I'd like you to know before reading this review that I had the pleasure of copy editing the piece before publication. As a copy editor, I didn't change anything in the story, just made sure the events were consistent with the first two books, and sussed out any spelling or grammar errors. I neither made nor proposed any other changes to this story. 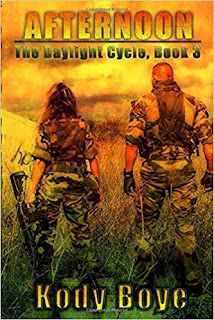 Having given you my disclaimer, let's get into the fun part! Afternoon is the third book of The Daylight Cycle. Initially Kody Boye wasn't sure he wanted to release it, because he wondered how it would stack up against the other two books. He was looking for another pair of eyes, and I volunteered. Afternoon picks up where the previous two books left off, and serves to tie in two seemingly unrelated storylines in a believable and exciting way. Rose, from First Light, meets up with Dakota and his crew of survivors from Sunrise. They band together with other survivors they have come across and on the surface everything seems safe, or as safe as it can be given that they're living during the zombie apocalypse. They spend their time fortifying their space, scavenging for supplies in the surrounding houses and shops, and getting used to life after the fall of civilization.

Everything is going well until the survivors run into trouble during a supply run. One of their members is taken down by a vicious pack of zombies. Of the three that survive, one is scratched. What's worse is that the injured survivor is Erik, Jamie's childhood best friend. It's just a small scratch and doesn't even break the skin, but nobody knows whether or not it will cause infection. Jamie is desperate to believe that Erik will be ok since there was no blood. Dakota and Steve, as much as they'd like to hold onto hope, are skeptical. Jamie's hope is put to the test as Erik's health begins to spiral. Fevered, bedridden, and incredibly miserable, nobody can deny he's sick. But the signs of infection aren't presenting themselves quickly enough. Is it the zombie virus, or something else?

Steve and Rose manage to repair a radio enough they they can make contact with other survivors, if there are any left alive. As luck would have it, they manage to contact a college in Boise, Idaho whose science department is still laboring away at curing the disease. The decision is made to take Erik to the university, because his condition isn't getting any better. Erik also feels a sense of duty - if he can be any help in curing the disease for others, than he wants to do what he can.

I'm going to be the first to tell you that I'm hoping Kody doesn't stop with a trilogy. I understand authors want to expand, create new worlds and characters, etc. To that end, I'd be happy with a short story collection down the road sometime. I'm not quite ready to be done with Steve, Dakota, Jamie, Rose, and the other survivors.

Not to mention Kody has given the zombie apocalypse a wild spin that I'm craving more of - the plant walkers. You read that right. They're dried up prune-looking zombies that smell like fruit, and undoubtedly dead, but maintain a small amount of intelligence and seem to abhor the zombies. It's a concept I've never come across before, and I have to admit that I'm super curious. I'm anxious to see if the plant walkers are the gentle shepherds they seem to be, or if they're something more sinister in disguise.

I found Afternoon to be a great way of tying the first two books together. It was great to catch up with Rose and several other survivors and see what they'd been up to while Dakota and his friends were traipsing across the country. I blew through Afternoon, despite editing it for spelling and grammar, because I couldn't wait to see what happened next. Particularly when the group was at the university watching the doctor perform tests on Erik. I was tense the entire time, waiting to see what would become of Erik. Whether he'd be a glorified guinea pig in a dead world, or whether he'd be the answer to their plight.

Whether or not Kody decides to continue with this series down the road, or if this is the last book he'll write with these characters, I'm 100% on board. The same goes for any other series he writes or has written. Kody has the ability to create characters who are realistic and varied. Some of the characters may more closely resemble the asshole sitting next to you in the cube farm than they do Mother Theresa, but regardless, they're realistic. As are the relationships between the characters. Whether friends, partners, siblings, or strangers, Kody deftly navigates the different interactions without weighing down or taking away from the action.

Do yourself a favor and go pick up The Daylight Cycle, because each book only gets better!
Bloodcurdling Books