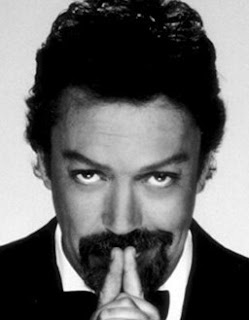 Today's post is a bit of a walk down memory lane for me, and a celebration of the charmed life of talented actor Tim Curry. Today the celebrated English actor turns 71, and it seems only fitting to take a look at his career highlights.

I was a fan of Tim Curry as an actor long before I could put a name to a face. Or a voice for that matter. A quick search on IMDB.com shows that his career stretches all the way back to 1968, which is impressive for any actor or actress. When you consider the sheer variety of roles he's played, it's even more staggering.

My first encounter didn't occur until 1992, with the release of FernGully: The Last Rainforest. Curry plays Hexxus, the pollution monster trying to take over and destroy a beautiful rainforest. (Curry worked with memorable talent such as Robin Williams, Samantha Mathis, Christian Slater, Cheech Marin, Tommy Chong, and Tone Loc.) Curry takes on many forms as Hexxus, including toxic slime and the badass skeleton-tar creature pictured. Kudos to the animators, who captured Curry's dramatic movements for this part.

My next encounters weren't much more grownup. He appeared in several animated series that I used to watch as a kid growing up in the 90s. I confess that I only know this because I am perusing his IMDB.com page so that I can get the years and titles of his performances correct.

I was in high school when I first saw the 1990 miniseries Stephen King's IT on VHS. (I think we borrowed it from the library or rented it. Does that date me, or what?!) Even then, seeing Curry was more of a coincidence than anything else. As a teenybopper, I had a raging crush on Jonathan Brandis, who plays the young Bill Denbrough, the leader of the Loser's Club. Even so, Curry stole absolutely every scene in which he appeared. His presence was so commanding that he stole even the scenes where he wasn't present, just based on the anticipation of his appearance.

If I had to choose his most iconic role, I would choose Pennywise the Dancing Clown. He was terrifying. Unpredictable. Nasty. Even when he was in his clown-guise, you could still feel the horror lurking just behind his eyes.

A close runner-up for me is Cardinal Richelieu in 1993's The Three Musketeers. He's slimy, devious, and downright scary as the Cardinal attempting to undermine a king and secure an alliance with an enemy country.

However, when most people think of Curry, they no doubt think of his first major movie role, Dr. Frank-N-Furter in The Rocky Horror Picture Show. He first portrayed the flamboyant and outrageous character in a London stage production of the same name. Curry absolutely steals the show in every scene as he struts around with complete confidence in his lingerie and heels getup. And that's to say nothing of his facial expressions! Curry is one of the most
expressive actors in the business.

While doing research for this post, I came across news that in 2012 Curry had suffered a massive stroke. He has been confined to a wheelchair and his speech has been affected, but from what I can tell the incident has not affected his spirit in the least. He is still as determined as ever, going so far as to star in the 2016 production, The Rocky Horror Picture Show: Let's Do the Time Warp Again.

If you are somehow not already a fan of Tim Curry, then I suggest you watch the following movies to become better acquainted. (And yes - there are some kid's films in there, because his voice-over acting is superb.)


Over his long career, Curry has played these and many other roles. What was your favorite movie?