The Zombie Hunters are Back! 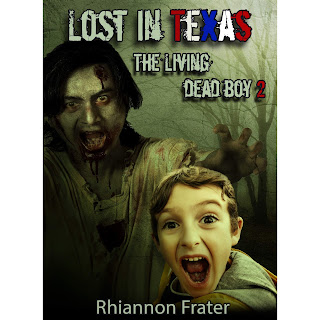 Yesterday I finished Lost in Texas: The Living Dead Boy 2 by Rhiannon Frater. I had read her first book in the series recently, and the characters were fresh in my mind. Not to mention, I am preparing for the new book which will be out in a little over a week.

Before I go any further, if you have no idea what I'm referring to, I highly suggest you hop over to my post, Classic Zombie Lit, which reviews the first book in the series. My guess is you're going to love The Living Dead Boy every bit as much as I did. After checking out my post, I highly recommend you head over to Amazon.com and snag yourself a copy.

"Lost in Texas: The Living Dead Boy 2" starts off right where the first book left off. Josh and his friends, the Zombie Hunters Club, have survived a botched evacuation at their school, spent the night in a treehouse surrounded by zombies, and also faced dissention within their group. Despite all the chaos, they've found familiar faces in the convoy in which they're travelling. The city bus they are travelling on is safe. At first. But with zombies closing in and the adults making one poor decision after another and nobody listening to the kids, who have spent much of their time immersed in zombie lore, Josh and the other members of the Club start to doubt their safety.

I absolutely loved "Lost in Texas"! I could hardly put my Kindle down. I carried it around the house with me, trying to read it while doing laundry, cooking dinner, and even folding laundry. This series is categorized as Young Adult Literature, but it will appeal to every age.  Rhiannon deftly navigates the intricacies of a pre-teen and teenage set of characters. The comments they make and the responses they have to each situation is not only age appropriate, but also shows growth. The Zombie Hunters Club are definitely not the people they used to be before the apocalypse started, and they continue to grow as the series continues.

One of the tropes in zombie literature (and movies), is the inclusion of a dangerous person or people. Rhiannon masterfully takes advantage of this as well. In Chad, she has created a terrifying character. He is both believable and terrifying. He stands in stark contrast to the members of the Zombie Hunters Club, because he is not only selfish, but he is cowardly. The Zombie Hunters Club believe that if they band together they will survive. They chose Josh as their leader because he's level-headed, and seems to make the most thought-out decisions. Chad is rash, domineering, and downright crazy. I suspect him of being a sociopath because he knows no limit when it comes to lying or trying to take what he wants outright. He gets into a very scary scene with one of the girls in the group, and it hit close to home. I was in an abusive relationship in college, and I recognized the signs that I had failed to notice in real life in this character. Chad is just terrifying enough to be a threat, but he's not so overdone that his character isn't believable. He attempts to make full use of the disorder of the zombie apocalypse to make his moves.

Josh and the other characters mature, and as the book goes on, they are forced to make increasingly more difficult decisions. More and more Josh finds himself weighing options and featuring in whether or not it will get people killed. Only, they're not just people. They're his friends and family.

"Lost in Texas: The Living Dead Boy 2" is a wonderful book, a perfect follow-up to "The Living Dead Boy", and sets the stage for the third book in the series. No matter what kind of books you prefer, I recommend this book highly. I also recommend it for adolescents that are wanting to get into literature, but their parents are wary of it being too bloody or having sexual content. In short, Rhiannon Frater's series is fantastic, and this book is a welcome addition!