Short, Gory, and Totally Worth It! 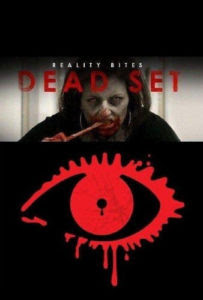 Some years ago, when I was first realizing that there was an absolute boat-ton of zombie material available, a friend mentioned a British mini-series to me. Called Dead Set, it features a fake Big Brother TV show which is in full swing when the zombie apocalypse hits. The kicker? None of the contestants know what's going on.

The show starts on the night of an Eviction, where a cast member is chosen to leave the show. There is a crowd outside the studio, waiting to see a live interview with the cast member who is evicted. There is a big stage and a dolled-up host. In the meantime, another crew member was sent to get a previous Big Brother contestant's mother because there is also a reunion party going for previous Big Brother participants. Needless to say there are tons of living people at the studio when the first zombie shows up.

Inside the Big Brother house, the screaming doesn't sound unusual. They mistake the screams of agony for the fan frenzy of eviction night. The next morning though, things seem to have changed but they can't figure out why. They just know that the cameras aren't recording, Big Brother isn't reminding them to put on their mics, and things seem a bit quiet. Dead, almost.

Life in the fishbowl changes abruptly when Kelly, one of the behind-the-scenes 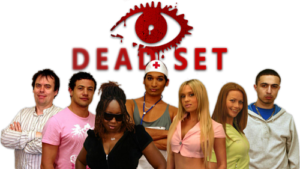 workers at the show, comes in bloody and carrying a huge pair of blood-dripping scissors. She tries in vain to explain to the cast what happened, and that not only is there no TV show anymore, but there may not even be a world at all. They don't believe her, until one of the cast members opens a fire door, accidentally letting a zombie inside. The zombie is fast, ravenous, and bloody as hell. Before anyone can do anything, another cast member is bitten on the leg. Kelly dispatches the zombie in a very gory sequence featuring a fire extinguisher and some really realistic special effects.

From there on, it's a tooth-and-nail battle for the contestants of Big Brother and the few crew members left. They must stay alive against all odds, which includes ravenous, rabid, fast-moving zombies. As if that weren't enough, some of the cast members themselves become obstacles to survival.

I'm not big on Big Brother type shows, but this is phenomenal. The characters vary from funny to downright insipid. The non-zombie protagonists are downright terrifying. Dead Set doesn't hesitate to delve deeply into the horrors that humans are capable of both in times of stress, and in times of relative quiet. 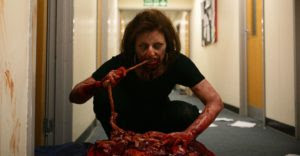 I highly recommend this show, especially if you have the roughly two and a half to three hours to run it from start to finish. The storyline is compelling, the effects are super impressive, and the death scenes are inventive. While there are many tropes of the zombie genre present, Dead Set definitely sets the bar higher for movies and TV shows that follow.