March 11, 2017
I have a confession to make. One that might make your blood run cold, shatter your childhood, and doubt my sanity.

I hate The Wizard of Oz.

There. I said it. It's always been true for me, even as a little child. Not even the knowledge that Toto was supposed to be a Boston terrier has made me give a damn about this absurd movie. As far as I'm concerned, there are only three good things that have come out of The Wizard of Oz. 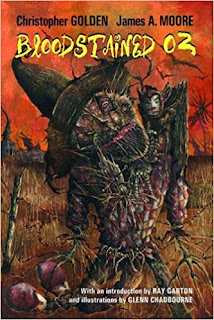 Bloodstained Oz is an absolutely nasty take on the idea of The Wizard of Oz, but it's not a retelling by any means. It takes place in Kansas in 1933. As happened in the Dust Bowl, a storm comes in. But this is no ordinary storm by any means. After the tornadoes touch down and wreak their havoc, the main characters are left to try and survive the horrors the storm brings with it.

There's 9 year old Gayle Franklin and her parents, whose parents are trying to make it as corn farmers even though there is a severe drought. After the storm, Gayle finds little porcelain dolls scattered in the dirt. A dying Scarecrow warns her that they are not what they seem.

Stephan, his wife Elisa, and little baby Jeremiah are traveling Romani who sell elixirs. They encounter horrible winged creatures that shouldn't be possible. Their only shelter is a wagon and the symbols of faith inside.

After the storm breaks, prisoner Hank finds a beautiful necklace in the irrigation ditch he and the other prisoners are forced to dig. He hides it in his pocket, thinking he can sell it and start his life after his prison sentence ends. All his hopes are shattered when terrifying vampires with emerald eyes attack the prison, searching for something.

Bloodstained Oz clocks in at 114 pages, but don't let that fool you. Golden and Moore waste no time getting the reader acquainted with both the characters and the horrors they will face. I started this book at work on lunch, and I wish I hadn't. All I wanted was to snuggle under my comforter at home and read it from beginning to end in one sitting. When I got home, I quickly made and ate dinner, and then climbed into bed to keep reading. I never wanted Bloodstained Oz to end. When I got to the end, I rolled over and snagged my advanced reader copy of Bloodstained Wonderland, which is the as-yet unreleased sequel. I fell asleep with the book hitting my face around page 61. You can bet once I'm done with this review, I'll be returning to it!

I can't say enough about how awesome and scary Bloodstained Oz is. It's a genuine page-turner with solid characters and wonderfully twisted monsters. Golden and Moore borrowed from The Wizard of Oz, but make no mistake. This isn't a retelling. They took well-loved characters such as The Tin Man and The Scarecrow and warped them into something out of a fever dream. I'm not a fan of porcelain dolls, so I'm going to say those were my favorite, but just barely. Everything in this book is fresh and terrifying.

It pains me not to say more about the plot and the fates of the characters, but the fun of Bloodstained Oz is wondering exactly what is going to happen next. I don't want to deprive any readers of the scares and chills that come with exploring uncharted territory.