March 01, 2017
I've been a fan of Adrian Chamberlin's work since I first read The Caretakers. He's a helluva writer, and has a sense of humor to match. After reading The Caretakers, I resolved to pay close attention to any anthology in which his work is featured, as well as to his own books. 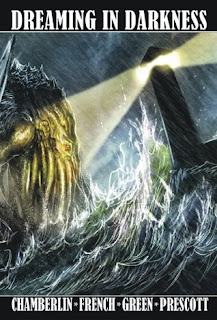 I stumbled on Dreaming in Darkness awhile ago and had purchased it for my Kindle. Since I finished a run of books for review, I wanted to read something quick for myself. If nothing else, it would be vastly different than the books I had been reading, and I thought it would work as a palate cleanser until the next round of review books arrived.

Dreaming in Darkness was more than I could have ever hoped for, and just may have spoiled me for Mythos literature forever. There are only four stories in the book, which clocks in at  a massive 356 pages. Each story is by a different author, and I tell you no lies when I say that all of them were fantastic. After having finished it, I'd be pressed to select just one as a favorite. They were all so wildly different, yet united in that they were horrifying on a visceral level. These stories are what primitive fears are made of!

Before I go into each story, please note that I am giving vague descriptions of each. They are all wonderfully complex with solid and engaging characters. But I don't want to deprive the reader of the surprise and terror by spoiling the stories ahead of time. Therefore, please forgive me for the thin descriptions.

In this tale, retired detective Carl Sanford returns to the field at the behest of a friend. His interest in the occult as well as conspiracy theories makes him a particularly important viewpoint on the latest murder case. As Sanford and the others delve deeper into the case, they find that not only are many of the occult theories actually true, but that there is a cult called the Order of Oriphiel that seeks to overturn the world order and bring the Apocalypse.

A centuries-long struggle to keep a horrifying idol out of the wrong hands comes to a terrifying climax at an abandoned monastery during the English Civil War. The majority of the soldiers caught up in the mess think they are fighting their Civil War. Little do they know that Shadrach and his old foe have also come together to wage their own war, and everyone around them will get swept into it. Not to mention having to cross a hellish forest with an agenda of it's own!

A writer goes and stays in a castle, hoping to find inspiration after his marriage and life crumbled in the aftermath of his first successful novel and the dry period that followed. He's researching the legend of the Lambton Worm, and thinks himself lucky to find his host is none other than Lord Tristam Lambton himself. However, he stumbles onto a pagan ritual and from there everything goes to hell. He soon finds out that not only is the Lambton Worm no legend, but he now must fight this cult for his life.

Instead of bringing the Old Ones to us, we are brought to the Old Ones. Literally! Monoliths rise from the sea, people wander into the ocean only to be changed into horrifying creatures, and then one day, the Earth itself is transported somewhere else. Our characters are left to battle against the Old Ones in their own environment, among countless other horrors, as they also struggle to get the Earth back in it's own universe.

Again, these descriptions are thin compared to the wonderful complexity of each story. The descriptions in all of them are guaranteed to give nightmares - I can attest to this personally, from experience. At first I thought I could pick favorites, but by the end, I was positive that every story is unique and terrifying in it's own right.

All four authors masterfully blend suspense, thrills, scares, and mystery together. Dreaming in Darkness is an absolutely amazing book, and at $4.00 for Kindle, it's an absolute steal! If you don't have a Kindle, don't despair. You can still read it with the free Amazon Kindle app.
Bloodcurdling Books