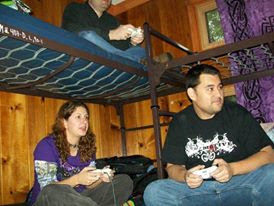 From the very beginning, technology has played a large role in the relationship I have with Tkout. The picture of us on the left is from Astronomy Club Fall Campout 2009, a few days after we started dating officially in October. We were playing Left 4 Dead with our friend Maverick, part of whom you can see sitting on the top bunk. We put tapestries in front of the windows because we were playing during the day, and we played on the XBOX Tkout had just gotten for his birthday a few weeks prior.

What's even funnier about all of this is that when Tkout and I met, we were at a LAN gaming party at my college. (LAN is a local area network. Basically a bunch of nerds hooked up to the same network to share files, game, and hang out in the same space. It's super fun! Go if you have the chance!) I digress. Tkout and I had met originally at the LAN while playing a first person shooter game called F.E.A.R. In the game, you're on one of two teams, and you're running around killing the other players. Tkout and I hadn't met formally until he decided to run a full round with our mutual friend Plastiqmanb with no weapons. Just kicking and punching. I was an easy target because I'm terrible at those kinds of video games, so Tkout kept finding me to raise his kill count. I finally looked up and yelled, "Who the f--- keeps kicking me!?" A really handsome face with dark eyes and hair raised up over the computer and Tkout waved. Before anything else could be said, he made a few keystrokes, and my character fell dead. Again. From a terminal kick.

When we were first getting to know each other I used to play World of Warcraft on a beat-up laptop. (For those of 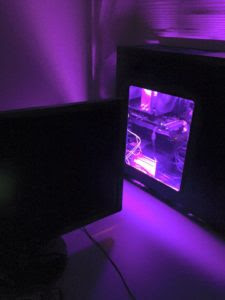 you that aren't familiar, World of Warcraft is an MMORPG, or massive multiplayer online role playing game). Tkout's first grand gesture was to build me a really nice gaming computer. It's a gesture he's repeated several times, always making sure I have a really nice gaming rig and peripherals (mouse, keyboard, etc.). The picture to the right is my current rig, which has purple LED lighting. He knows I'm a sucker for color and light, so he bought me a mouse, keyboard, and mousepad that change colors. The colors are dictated by the software that comes with the peripherals.

I have always appreciated the computers, but I think only superficially. Until last night, I didn't have a real appreciation for what he was doing for me. I didn't see the computers for the gestures that they really were.

Most of the movies and TV shows we watch are on digital media on our PLEX server. That allows us to stream our content from our computers, and makes it easier to watch than trying to hunt down a physical copy. Tkout doesn't like to leave his computer running constantly because of the wear and tear on the parts, but I don't mind. I don't play games as often as he does. Well, we decided to make a PLEX server together. Basically, a bare-bones computer setup that would house all of our digital media so that we could stream it. I wanted to build it with him because I have a job as a desktop technician, and it's handy to know how to build a computer if you're going to go about fixing one. I also am looking to get the CompTIA A+ certification, which is equivalent to a low-level college degree in computers. Fully one half of the test is geared towards the actual hardware. Building a computer and interacting with the hardware is a great way to learn what the parts are and their functions. Also how they work together. 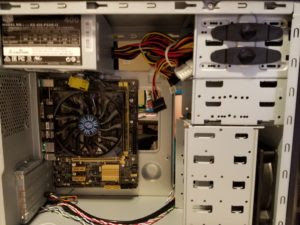 Before he builds a computer, Tkout spends hours reading through tech articles and comparing components until he has exactly what he needs for his purpose. That's why he bought the parts by himself. Eventually I hope to be able to pick out parts, but I don't know enough just yet. Yesterday we sat down and he went over the parts of the motherboard. He explained about the history of the components, which doesn't sound like much, until you know that he taught himself. From scratch. In a time when you couldn't just go and YouTube or Google the answer. I'm in awe that he knows so much, but he takes it in stride. He's been there for the explosion of the popularity of the home computer.

He referenced how computers used to be, in terms of where the chipset could be found, or what its function was. I knew a little because back when Microsoft ME (Millenium Edition) came out (in 2000) I had my first home computer that I could take apart and re-image and generally play with. My parents were worried I'd break it beyond repair, so my meddling stopped. But it gave me a small background from which I'm launching my current career.

Tkout is an absolute wizard. He works with such patience, attention to detail, and skill that I was literally in the 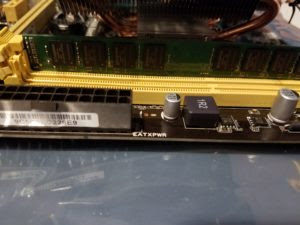 presence of an artist. There's a reason for everything he does, and every piece of equipment that he uses. He's also patient with me, and answers all my questions without getting annoyed. That doesn't seem like much, but I'm inquisitive to a fault, and wind up dragging him down a rabbit hole of questions.

We also got a few laughs out of building the computer. The picture to the left is part of the motherboard. If you look closely, you will see EATXPWR written in white letters. I asked him what "eat x power" was. He couldn't stop laughing. I forgot exactly what it means, but I know it's excellerated ATX something-something. Good thing he takes things in stride, because that's just a taste of the questions I was asking. 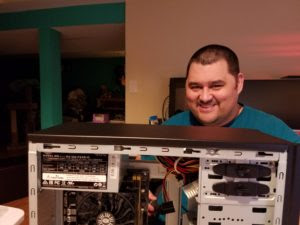 Just because I can, I snagged a picture of Tkout as he was fitting the solid state drive into the computer. He's wearing his t-shirt from MassiveLAN, which is a charity computer gaming event we attend twice a year. (If you're interested in finding out more and attending, check out the website here.) The weird red stripes behind him are the red LED lights shining out the side of his computer.

We aren't done building the computer, and we also have to get the hard drives ready with all of our digital media. I asked Tkout to wait for me, because I want to be involved in every step of this process. He's very excited, because for years he's wanted to share his passion with me. He has lived and breathed computers for over a decade. Truth be told, I am glad he's taken me under his wing. I don't think that any course or book could teach as in-depth and hands-on as he does.

Over the years I've had friends and family ask why I'm ok with him being a gamer. There are basic positives, like 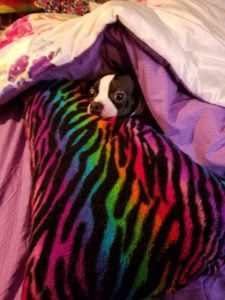 gamers tend to stay close to home. They also tend to introduce their friends to their wives and kids. We have several friends at MassiveLAN, which is a family event and has something to offer for almost every age. Now that I've had the time to sit down with him and watch him work, I appreciate Tkout's skill for what it is. I also understand why he chose a career in computers, and I'm glad that I've made that move as well.

If you're wondering why there's a picture of Zelda snuggled under covers, it's because even our family pets enjoy the gaming household. Zelda is comfortable snoozing on the futon in the basement with Chloe, our cat. They know we are near by for kisses and pets, and we are all home together.

I'm not sure if we are going to work on the rig tonight or this weekend, but rest assured, there will be another post detailing the progress of this journey. I can't wait to see what mischief we get up to in the next round of the build!