A great addition to an amazing series! 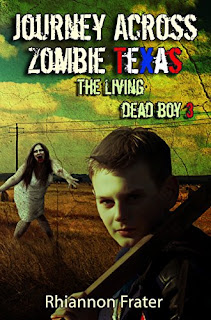 I’ve spent the last few days living in zombified Texas with Rhiannon Frater’s Zombie Hunters Club. I finished the second book in the series (Lost in Texas) in anticipation of reading the third book in the series. I was given an Advanced Reader Copy, and couldn’t wait to start.

While I was reading Journey Across Zombie Texas, Rhiannon released a short story called “Sam Versus the Zombie”, which takes place during the events of the third book. At one point, Sam is separated from the group and he takes shelter in a barn. The short is the story of him fighting for his life during a hellish hailstorm against a very persistent zombie.

Journey Across Zombie Texas is every bit as good as the first two books in the series. In fact, if I had to make a choice, I’m not sure I could give a preference to any of the books over the others. Rhiannon excels at putting her characters in very realistic threatening situations, which makes the reader worry for everyone’s safety. There is no such thing as a safe encounter with a zombie, and sometimes not even with other people.

This third installment finds Josh and the Zombie Hunters Club trying to cross Texas to get to a FEMA camp. The convoy that they had been travelling in has been compromised, and it’s up to Josh and his group to make it on their own. Unfortunately zombies aren’t their only obstacles. Well-meaning adults who don’t quite understand how the zombie apocalypse works inadvertently make their journey more dangerous. Not to mention a familiar and unwelcome face in Chad, the group’s living adversary. As if being doggedly followed by swarms of the living dead weren’t bad enough!

Journey Across Zombie Texas was a difficult book to put down. I started reading it over the weekend, and unfortunately for me, I had to sleep sometime. I didn’t want to put the book down ever, because it was so exciting. Josh and his friends were adept at getting out of most of the situations unharmed, but there were a few that I was positive there were going to be casualties. Despite my love for all things zombie, I’m ashamed to say that I probably wouldn’t have been able to be that level-headed.

The other aspect of the book that I want to point out is how realistic the kids’ reactions to the events were. Some were traumatized, some panicked, others put their heads down and thought things through. The range of emotions and responses was realistic, but also was another way for Rhiannon to show the reader the growth that the characters experienced throughout their journey. The reader can see each character progressing in terms of complexity with each passing page. I am really impressed with the overall result.

I hate to pressure Rhiannon, so I will just say this. I would love for the series to continue. I’m looking forward to hearing more about the adventures of the Zombie Hunters Club. Also, there are a few unanswered questions that I have after finishing the current last book in the series. Although she hasn’t announced anything (to my knowledge) in terms of where she wants to take the series, I would be happy with a book of stories about the characters set in that universe. She’s done that for other series, so I’m holding out hope. Especially if this series becomes as well-read and well-known as it should be.