Yesterday Was a Great Day 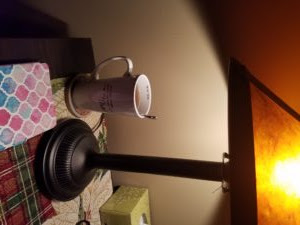 I'm going to apologize right away, because I have no idea what this post is about. I'd say it's slice of life, but it's more like random and happy babbling. If that's not your thing, I recommend that you check out the other posts, that revolve around more concrete ideas and reviews.

Lately I've been spending more and more time in the company of my Kindle Paperwhite. I'm not even kidding when I say that I take it absolutely everywhere with me. I thought I left it at home the other day when I went to work, and let me tell you, that was NOT going to fly!

I have mentioned in other posts that I have anxiety, and am trying to learn to control it better. It was suggested to me recently to have a cup of Tension Tamer tea every night before bed. My first night trying that particular trick was Wednesday night. Tension Tamer isn't a new tea to me, I used to love it when I was in high school. Although I have what feels like every tea ever produced sitting in my kitchen, that's one that I had run out of and never restocked, so I will be going to pick that up later tonight. Anyway, I decided to go with the next best thing - pineapple chamomile. I made a large cup of it, went to my bedroom, and proceeded to read while drinking the tea. I remember talking to my best friend on the phone, and I remember messaging with him. I remember my husband coming up to bed. And I remember saying goodnight to my brother, that I would catch him in the morning.

I woke up a few hours later, the bedroom light still on, face-down, my body hanging half off the bed (thanks to Zelda, she's an aggressive snuggler),  and my Kindle open a few inches from my face. My memory doesn't include the moment when I took off my glasses and put them on the side table, but they were there.

Yesterday was a really really good day all around. Work went smoothly, and then I got to go and visit Dipper and Phoebe. McDonalds is selling LEGO Batman themed cups with their Happy Meals. Luckily, you don't have to buy a meal to get a cup, you can purchase them separately. I snagged a red and orange for dad, a red and orange for me, and Phoebe got the orange cup with her meal. All we are missing now are the green and yellow cups. I bought what I thought was a Batman mask for Dipper, but it turned out to be a Viewmaster type toy. Explaining that to Phoebe was a riot! It was hard explaining what a kick-ass toy it was back then, especially when you're talking to a kid who plays games on a tablet in her hands, and can talk to anyone in the world with the touch of a button. 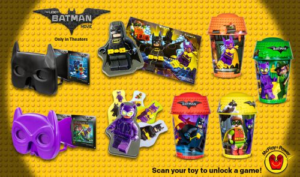 After we had dinner and checked out our cups, I pulled out my crochet. I'm working on a blanket for one of mom's friends. It's a wild colored monstrosity that I almost frogged and started over a few times. Phoebe was the one who encouraged me to see it to the end. It's definitely going to win the title of Most Colorful Afghan to Date. It's always dicey crocheting at their house, because Vampira has a way of playing tug of war with me. Usually she'll pounce on the yarn, tug on it, and then follow it right to my hook. When I was in Dollar General the other night, I picked up a pink plastic basket with a trellis design. It fits 4-5 skeins of yarn easily, and if I 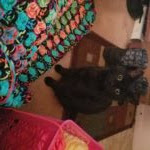 start out right, I can spool the yarn from the top without having to turn the whole skein. I put the yarn in the basket, sat it close to me, and began. I think I have momentarily outfoxed Vampira, but I don't expect that to last. She's really clever and energetic. I expect this method to hold up maybe one more visit before she finds her way around it. You can see her giving me what Phoebe calls "a look" in the picture on the right. After that she stayed close, thumping her tail and throwing shade at me whenever I glanced her way. Phoebe tries to help me distract Vampira, and I appreciate her efforts, but that kitty has laser focus when string is concerned! While I crocheted, we watched tv, and Phoebe showed me her new Monster High doll. Originally it was a Target exclusive, but Dipper snagged it off ebay for a reasonable price. It's the version of Clawdeen Wolf where she's dressed up as Little Red Riding Hood. (Believe me, it's on the list of things I need for my horror-themed library downstairs!)

Dipper and I had a big brother talk, which I was very much in need of having. My anxieties have been getting the better of me recently, and when that happens, it sometimes is necessary to ground me in reality. After our talk, I feel much better. More secure, and in a better spot in general in regards to the anxiety.

As it turned out, Phoebe hadn't finished all of her homework yet. She still had to do her 20 minutes of reading. I'm so happy that her school has the students reading every night. Not only is it an important life skill, but it's fun. Phoebe was already sitting on the couch under her Wonder Woman fleece blanket, so she just needed me to grab my Kindle and join her.

Phoebe is reading a graphic novel called Smile, by Raina Telgemeier. She's really into it. She's in fourth grade right now, so the character in the story is close to her age. The story follows the author from grades six to high school. On top of everything else she has to deal with, she trips and falls, injuring her two front teeth. After that it's braces, trips to the dentist, and all sorts of coming-of-age obstacles. Phoebe would stop here and there to read me a few frames, or show me a picture. She's a very involved reader, often laughing out loud, or rolling her eyes when the characters do something silly. A few times, she pointed out to me how some of the characters weren't very nice to each other. Thus the difference between kids and adults. She thought it was mean. I thought the comments were pretty funny, as I read them as sarcasm. Phoebe's innocence and loving personality is like a little space heater. You can feel it radiating off her.

I'm currently reading 36 by Martin Berman-Gorvine, which is about the tzadikim. The tzadikim are, according to Jewish tradition, the 36 righteous who justify the continued existence of the world. In the story, Martin posits what would happen if something were to happen to the 36. It's a very dark, involved, and intense novel. I'm enjoying every page of it. Phoebe asked what it was about, so I shortened it. I told her it was two friends on a road trip. Which is not untrue. The difference is that Lonnrot is chasing the tzadikim to warn them that something is happening to the others, and Nahum is more or less along for the ride because he decided since he's Jewish, he feels responsible for Lonnrot following this "myth". It's a little too involved to explain to Phoebe, not to mention she doesn't have the educational background in fourth grade to understand the Holocaust or many of the motivating factors of the characters. That's alright. When she's older, that book will be waiting for her. She was satisfied with that answer, and we started reading.

As we sat and read, Vampira came over and demanded that I scratch behind her ears. She purred loudly, and for the first time ever, I caught her drooling copious amounts. Phoebe was overjoyed when Vampira hopped onto the back of the couch and settled down with us. It was fantastic! To the point where we actually read a little over the 20 minutes. 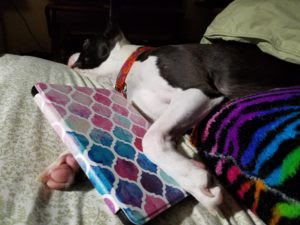 When I went home, I made some more pineapple chamomile tea, walked Zelda, got my Kindle, and hopped in bed to read. Zelda grabbed a chew toy and hopped up on the bed with me. The only thing missing was that it was a Thursday. That would have been perfect as a Friday so I wouldn't have left early!