The 'Burbs Just Got Stranger... 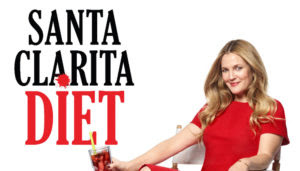 Facebook has been buzzing about a new show called Santa Clarita Diet. Truth be told, up until last night, I didn't know anything about it except that it starred Drew Barrymore. In many ways, I'm tapped out on horror-themed shows. They're starting to run together for me, which is why I've detoured into Rick and Morty recently, which is satirical and funny and dark enough to get me through watching it. (Which, by the way, I will definitely recommend watching, though not with your kids. Unless you like answering questions about subjects not for polite company. If you do, well, your funeral. You know?)

Anyway, my friend Suzanne recommended I start watching it sooner rather than later. I've been working on 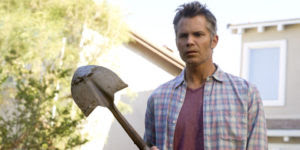 an afghan for one of mom's friends, and since it's just a granny square pattern, it's not very complicated. That means I can start new shows or movies while working, otherwise I'd have to pay too much attention to the pattern. In any event, I figured last night was the right time to start something new. I went to Netflix, found Santa Clarita Diet, and immediately squealed with delight when I realized Timothy Olyphant played Drew Barrymore's husband! I absolutely love his movies, and am always up for anything that has him as part of the cast.

In any event, the show started normal enough. Barrymore and Olyphant live in suburbia with their daughter (played to perfection by Liv Hewson). They live in between two cops, pardon me, a cop and a sheriff's office employee, as the characters make a point of saying. Again, pretty normal suburban comedy set-up. Barrymore and Olyphant are a husband-wife realty team, and they're pretty bad at it. While showing a house, Barrymore suddenly gets violently ill, throwing up what can only be considered the modern equivalent of the pea soup scene in the Exorcist. On steroids. In a color I guarantee you've never seen before. 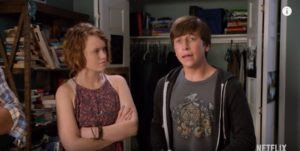 From there, the show goes flying off the rails immediately. The audience has an inkling that Barrymore is a zombie, but it's not until the neighbor boy (played by Skyler Gisondo) confirms it without a doubt. However, this isn't the usual zombie show by any means. Barrymore doesn't look dead. Aside from her penchant for screaming-rare meat, she doesn't look or act like the regular zombie. Again, our nerdy-but-lovable neighbor explains that in becoming a zombie, Barrymore's id has more or less just taken control over her. Which doesn't seem bad at first. She's more sexually free, and becomes a realty badass. But Olyphant quickly learns that there are some dark sides to her less uptight attitude. 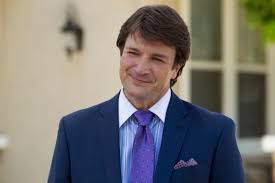 The supporting cast is fantastic. Fan favorite Nathan Fillion is a rival realtor, and Patricia Belcher (of Bones fame) shows up as a bitchy ER nurse. From what I've seen, Belcher is only in on episode, and only for a little bit, but rest assured that she steals the scene. Character actor Patton Oswalt makes an appearance as a skeptical 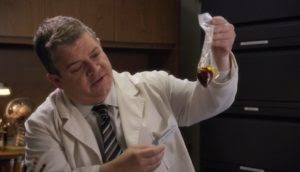 doctor at a local college. Fantastic!

Beware, the first episode is rocky. It feels overacted, and until you get used to the style of humor, expect some surprises. By surprises, I mean I watched the whole thing with my jaw dangling. By the second episode, I was irrevocably attached. Friday, there will be a marathon. Srsly. My only recommendation is to eat dinner BEFORE you sit down to watch this show. The first episode was killer, in terms of both vomit, and Barrymore trying to come to terms with her new lifestyle.

Even if I were to prattle on for hours, I couldn't begin to scratch the surface of how awesome this show is. The acting. The writing. The actors. The gags. What's possibly strangest of all, is how a show with such a wildly improbably premise can radiate such feel-good energy. The cast looks like they're having a blast, and as the audience, you just can't help but be hooked.
Drew Barrymore Liv Hewson Movies and TV Nathan Fillion Patricia Belcher Patton Oswalt Rick and Morty Santa Clarita Diet Skyler Gisondo the Exorcist Timothy Olyphant