February 16, 2017
When I finished All Souls Day, I literally couldn't wait for the sequel. Well, as it turns out, we all have to wait because it's not ready. In the meantime, author Martin Berman-Gorvine asked  if I wanted to read another book in the meantime. I chose 36 for a variety of reasons, not the least of which is that I'm interested in mysticism. 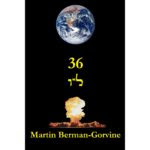 36 takes place in the future, after a third war has rocked the world. Eric Lonnrot, a detective heavily interestd in Jewish mysticism, has been researching people for years. He believes they are the tzadikim, or 36 righteous whose actions justify the continued existence of the world. Through his research, he notices an alarming trend - they're dying off. What's even more troubling is that they're dying off faster than they can be replaced. Lonnrot talks his friend Nahum Applefeld, who himself is a survivor of horrific genocide, to accompany him. Nahum doesn't share the same views as Lonnrot, but feels responsible since he's Jewish, and the idea of the tzadikim is a Jewish myth.

Lonnrot and Nahum's journey turns out to be more than they were expecting. There are glimpses of good, and terrifying abysses of true evil. Through accident and sheer coincidence, Lonnrot and Nahum also learn each other's deepest held secrets. Their friendship is tested, as are their ideals and worldview.

Nahum eventually splinters off from the quest and goes in search of his own answers. He has seen too much sadness, to much evil, too much horror. Even before he joined Lonnrot. He also begins to suspect that Lonnrot's motivations are not quite what he's letting on. Nahum begins to suspect that the journey has more to do with Lonnrot's own needs than that of keeping the tzadikim alive.

For his part, Lonnrot does experience growth during his journey. The more of good and evil that he sees, the more he searches his own heart. He begins to examine the choices he's made, and the life he's lived. There is a particularly dark period of his life that he begins to question. Was he just going with the motions of society, or is it really a reflection of who he is at his core?

I can't rave about 36 enough. It's two main strengths are the characters and Martin's ability to successfully world build. To the point where I found myself checking the web here and there to verify the reality of people and events in the book. He creates a world that is so different yet so similar to our own that it almost feels like a history book, even though it's obviously an alternate history.

Lonnrot, Nahum, and the other supporting characters all have depth. They are believable in terms of they could actually be people that you know. When they speak, there's a whole unwritten history below the surface that informs their choices and actions. This also leads into my point about world building. Not only are the characters three-dimensional, but so is the world in which they live. There are no lengthy explanations of events or political alliances between countries, yet somehow Martin manages to get all of his points across. The end result is a book that you can't help but fact check on the Internet because it feels so real.

Lastly, 36 will leave the reader looking into themselves. It's easy to sit back and say that if you were in someone's shoes you would be able to make better choices. When it comes right down to it, is that really the case? There's always more to the story than what we see in the beginning.

I recommend 36 anyone who is looking for a book that makes the reader challenge themselves and the accepted normalcy of society.
36 Eric Lonnrot Literature Livingston Press Martin Berman-Gorvine Nahum Applefeld tzadikim