February 12, 2017
From time to time, I detail my battles with anxiety and depression here. Maybe that's your bag. Then again, maybe it isn't. If it's not, I'll totally understand if you want to go and scope out a different post. It's not for everyone.

A little while back, I started what I call "Self Care Saturday", and I usually declare it after a particularly difficult week. This past week definitely qualified. Tuesday night, I thought I was straight up losing my shit. It was one of the worst anxiety nights I've had in awhile. Back to back crying jags, needy button-mashing, all kinds of things. I'm still trying to learn how to forgive myself when that happens, but as I've been told by a few people, it's a process. A war. Not a single battle.

Today I needed to hunker down and take care of myself. Recharge after a rough week. It started out with a trip to Tops for groceries. I needed to restock the meat in the house, and also grab some things for Valentine's Day. I have a plan of what I want to make us for dinner. Not to mention, I had to snag some Tension Tamer tea by Celestial Seasonings. Suzanne said it's an absolute miracle tea for anxiety. I plan on drinking that tonight. That went surprisingly well, but probably because there were only a few bluehairs roving the aisles. On the way home, I talked to my parents. They wanted to stop by, but I asked if they would hold off. It's hard explaining to someone what it's like when you need to preserve the sanctity of your bubble. 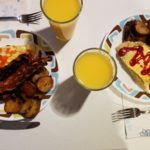 While I put groceries away I got breakfast ready. I made scrambled eggs, bacon, and sliced up potatoes. My dad used to put butter in a skillet and cook them, but I am more inclined to improvisation. I looked up a recipe on homemade homefries, and then did my own thing. Which was vegetable oil, paprika, chopped onions, salt, and pepper, and thickly sliced potatoes. I also served the orange juice that my parents brought us last weekend. Tkout was overjoyed. I was pissed about burning the bacon. I can do many things, but apparently making bacon without burning the shit out of it is not one. Oh well. Tkout took down the smoke alarm, since it was enthusiastically cheering me on.

My parents had also brought us carrots, onions, and potatoes last week because they 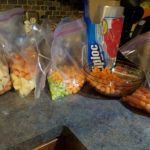 were on sale. Buy one, get x amount free, to be exact. Which means that we've been living with 4 full bags of carrots, a whole bag of celery, two bags of potatoes, and two bags of onions with no idea what to do with them. I wound up cutting them up so that I could freeze them. I hate wasting food. It seems that I never have the veggies when I need them, so this seemed the perfect middle ground. Waste not, want not. Hassle not. 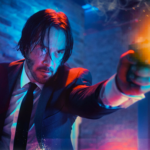 I was tired and debating a nap, but Tkout and I have wanted to see John Wick: Chapter 2 ever since we heard it was confirmed. We aren't big on going out for Valentine's Day, so we will probably stay home and have dinner. Something nice and quiet. I consider the movie our pre-Valentine's Day date. It was a really great movie, and I was pleased to see returning characters from the first. There were laughs, scares, tons of action, and even some really sad moments. The downside was that I wound up having an anxiety attack during the movie. I'm not really dsure what set it off, except the fact that there were people sitting in our row, maybe. I don't know. I don't always have a noticeable trigger. That's something that baffles many people, including my parents. Tkout and Dipper get it. So does Phoebe. Shit just happens sometimes, you know? Anyway, I got out of my seat, headed to the bathroom, and spent a few minutes crying it out and messaging Dipper. I was able to finish the movie.

When we got home, Tkout and I were both tired. I changed the sheets on our bed and put on the new green leaf comforter Dipper gave us for Christmas. We snagged Zelda, I read for a bit, and then we took a nap. It was great. I woke up and messaged a bit with Dipper while getting dinner ready. 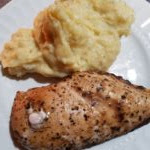 Earlier in the day I marinated chicken in balsamic dressing. I also took the potatoes and made mashed potatoes from scratch. I not only didn't use a recipe, but I totally judged the amount wrong. Which means we will have enough mashed potatoes to have with Polish kielbasa tomorrow for dinner. Score! Tkout was pretty excited. I boiled the carrots down to nothing so that was a waste. But otherwise everything worked out well.

After dinner, I decided it was time to rest. I curled up with the fuzzies on the futon 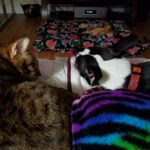 and Tkout put on The Mist. Dipper and I talked for a bit on the phone and then I put on Suicide Squad. It's still on, and I'm sitting here on my computer typing this up. Before I began, I took my daily journal and made sure to finish the list of things I accomplished today. It may seem superfluous, but it helps me get by. It helps me take stock of the day I had and look at it with honest eyes. It keeps the anxiety down. Reminds me of the good times. Shows me that I can do what I need to, and that the anxiety and depression haven't taken me down. I also use it to log information about what kind of day it was in terms of mental health. I'm hoping to track any patterns, or even more simply, see that the days aren't as bad as I sometimes think they are. That I'm winning. Battle by battle. Yes, I cried today when I was out in public. But you know what? I have groceries in the house. And I saw an amazing movie all the way to the end, minus the time when I stepped out to get my shit together. Today, the battle was won. Tomorrow is another battle, and I'm ready.

If you're wondering what kinds of things go in the list, I will do that as a separate post. While writing this, I've decided that I'm going to make part of this blog about my journey with mental health. There for those who need it, but not necessarily in the way for those that don't.

I wish you all well.