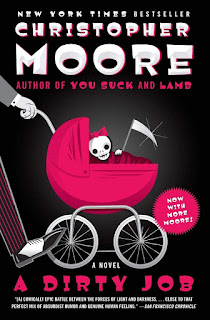 Several friends have recommended Christopher Moore's books to me over the years. I picked up a few of his books, A Dirty Job, Bite Me: A Love Story, and Lamb. The Serpent of Venice is on the list of Dipper and my books to read. I wasn't sure where to start, so a friend suggested I begin with A Dirty Job, since I'm a fan of stories that feature the personification of death.

The story centers around Charlie Asher, a goyim who is married to Rachel, the love of his life. Moore immediately establishes a few truths about our main character. He's a beta male. He's got anxiety. He's the proprietor of Asher's Secondhand. And he's a complete nebbish. His wife dies while giving birth, and shortly after, a man in a mint green silk suit comes into the hospital room and steals Rachel's Sarah McLachlan CD. Little does Charlie realize this is only the beginning.

What seemed like a random and senseless robbery turns out to be a definitive moment for Charlie. It's revealed that the man who took the CD is Minty Fresh, and he's a Death Merchant, which is not exactly as it sounds. Death Merchants have a special date book that names and numbers appear inside. The name is the person who will die, and the number is the amount of days the Death Merchant has to retrieve the soul vessel. Soul vessels pulse red, and basically the job of the Death Merchant is to get the soul into the hands of the next person it's supposed to belong to.

While Charlie is trying to get used to his new responsibilities, he is also trying to raise Sophie. However, not even that part of his life is carefree, because strange things keep happening. Not the least of which is when two hellhounds show up and watch over Sophie. Charlie has no idea how they got there, or who they're from, but as the story progresses and the stakes get higher, he's glad the hounds are there.

I hate to admit it, but it took just shy of forever to get into this book. Charlie is such a nebbish that a good deal of the book is hard to get into. The graph on the right shows my reading progress for this book, as logged on GoodReads.com. The saving grace are the supporting characters. Ray, a retired cop who works for Charlie and suspects everyone of being a serial killer, Lily the goth who also works for Charlie but is studying to be a chef, and Mrs. Ling and Mrs. Korjev. The latter two women live in Charlie's appartment complex and take turns sitting Sophie. More often than not they offer comic relief. There's also Charlie's homeless friend, The Emperor, who thinks he's the emperor of San Francisco. His faithful canines Lazarus, a golden retriever, and Bummer, a Boston terrier, constitute his soldiers.

Once the story gets going, however, it really takes off! Once the darkness starts rising and the Morrigan and squirrel people get more prominent, the book becomes nearly impossible to put down. As a matter of personal bias, it definitely helped that little Bummer, the 7 pound Boston terrier, sees action against the Morrigan and winds up having a huge impact on the story's outcome.

I would recommend reading this book, and sticking with it. There is a follow-up called Secondhand Souls, which focuses on Sophie and the coming battle for the soul of humanity. This book certainly has my buy-in because many of the characters I came to really love appear in the second book. (I'm not going to spoil it, except for to say that Bummer is back in action...and a book with a Boston terrier certainly has my vote!)

Since I haven't read anything else by Christopher Moore yet, I can't really say if this is a better introductory novel or not. I think it really depends on what kind of story the reader is looking for, and what degree of patience the reader has in terms of waiting. Overall, I'm really glad that I took the time to finish A Dirty Job. It turned out to be the book I was looking for, even though I didn't realize it.