Not Your Average Mystery

February 08, 2017
I was approached by Kelley Kaye with a request to review her novel Death by Diploma. I have to admit, I didn't read the book description that she linked. She found me through our mutual friend, Stephen Kozeniewski. I decided to give it a go based on his recommendation.

I am extremely glad I went with the recommendation! Death by Diploma is not my usual type of book. It's a 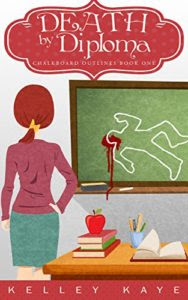 straight up mystery with no paranormal aspects. Whatsoever. However, what it does have is a rock-solid murder plot, two plucky and lovable heroines, and a whopper of a mystery. When it all fell into place, I was completely gobsmacked. I had no idea that's the direction in which the story was moving. The clues were easy enough to keep track of, but there were so many possibilities, I actually wasn't even able to begin guessing.

When the book first began, I thought it was a little rocky. When I perused the beginning of the book after I finished, I realized what I thought was rocky. The two main characters were friends, even though they were both females. Kaye didn't rely on cheap catty fighting to define her characters. They work together and form a very loyal friendship. Their personalities compliment each other, and even though Leslie is a fashionista, she's not a stereotypical stuck up girl. She's down to earth, fiercely loyal to her friends, and determined to find out who killed Melvin because she knows he deserved more than a gruesome murder.

The supporting characters are all really interesting as well. My favorite is Edward, the high-strung librarian. It's pretty clear he deals with anxiety, but he does his best to be a contributing member of the investigation into Melvin's murder. All the while trying to keep kids from lifting books from his library.

A special mention goes to the fuzzy cast too. Trinculo and Sir Toby. A calico cat and a sheltie, both females. They add a welcome touch of warmth and a smile. It doesn't hurt that they remind me of my own fuzzies, Chloe and Zelda, who are also a female cat and dog.

I have a little confession to make. I cringed when I realized this book was written about school teachers. I went to school to be a Spanish teacher, and did so for several years. As such, I'm always a little hinky about how teachers are portrayed. When it goes well, it goes very well. When it goes poorly, it's apocalyptic. Kaye shocked me by showing Emma, Leslie, and the rest of the teachers balancing their teaching duties with their concerns regarding the murder. It was only later that I realized Kelley was a teacher, that's why she writes them so realistically. I appreciated the little touches that she included regarding class schedules, and how treacherous it can be to navigate teacher politics. Especially when parents are involved.

I am so happy to say that Death by Diploma is listed as Chalkboard Outlines Book One. That means the readers will get to see more of Emma and Leslie's zany adventures. Even though I'm not sure I'll be diving into the mystery genre more than some Sherlock Holmes and the odd book, I will certainly be on the lookout for the next in the series. I highly recommend this book to anyone who is looking for a really good mystery tale with a little bit of love, a ton of friendship, and a whopper of a surprise ending!