February 06, 2017
Before I start this review, there's a little bit of a disclaimer I need to go into first. Part one is that when Stephen was writing Hunter

of the Dead, he crowd-sourced names off Facebook through a random draw on a post. I figured what the hell, and did it. I was one of the people picked. Therefore, should you take my sage advice and read this book, I'm one of the characters. When I was chosen, he contacted me, and asked if I had any requests. As I recall, I told him not to make the character suck (as if that were ever a remote possibility!)

The second part of the disclaimer is that I was approached to write a review, and gifted a copy. The price, was that I had to write an honest review. That's always a piece of cake with Stephen, because his books are fantastic.

All of that being said, I had no idea where the story was going when I started. I was pretty sure it was about vampires, and an elite vampire killer. But the story started off with what I thought were zombies. As it turns out, zombies are what people become if they can't stand the change to a vampire, or if their sire screws up the process. You see, vampires in Stephen's world don't need to drink blood after they get to a certain level of badass. They are able to draw the life source directly out of their victims. The zombies are the cleanup crew. As in, they come in and devour the remains of the meals. It's a mess, but there's always a bottom feeder, isn't there? 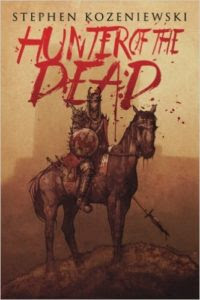 The reader follows several main characters throughout the story. Cicatrice is the most powerful vampire, he rules House Cicatrice, one of the 13 vampire houses. Otto Signari is his rival, the leader of House Signari. Topan is Cicatrice's get, but he is dishonored in favor of Idi Han. Idi Han was sired by Topan, and he to gain acclaim and respect by siring such a powerful get. Idi Han, for her part, doesn't want to be a pawn in anyone's game.

Just as there are vampires, there are also Inquistors, or vampire hunters. Bonaparte believes that the Inquisitors should centralize and put their strength together. Carter Price believes that it's better to go rogue, because then nobody can rat anyone else out if they're caught. When a vicious vampire attack at the convenience store where he works blows his cover, he's forced to take his shift manager, Nico, on as an apprentice. Disillusioned with the direction the Inquisitors are heading, Price bears this burden with no small amount of sass.

Amidst all of this turmoil, vampires start dying in rather large numbers. Too large for the Inquisitors to be involved, according to Cicatrice. He believes the legendary Hunter of the Dead has come back, but he's not sure why.

I really wish that I could say more about the book's plot, but I fear that I've given away too much already! There is intrigue, romance, mystery, and outright horror awaiting any reader brave enough to open Hunter of the Dead. When you're done, I highly suggest checking out his other novels. They're always fun, fast-paced, and well worth the read.
ghoul Hunter of the Dead Inquisition Literature Stephen Kozeniewski vampire zombie