February 27, 2017
Dipper and Phoebe came to visit us last Friday. Due to a possible obligation, they weren't able to stay over, but it was still an amazing evening. Phoebe got things going by showing me her new Superhero Girls toy. It's Wonder Woman on a motorcycle, and it's downright badass! She also brought Clue, but we didn't get a chance to play. The week had been rough on everyone, and we were all dying and ready for the sleep of the dead by about 9:30.

Since it was the last Friday of winter break Phoebe and Dipper had gone out around the town together. Among their stops were Barnes and Noble and Toys R Us. Dipper snagged a few graphic novels and a Gravity Falls Cinestory Comic for Phoebe, which I called dibs on after she finishes. (Phoebe liked Gravity Falls before I came along, but I suspect that she finds it even funnier now, since her dad and I are so much like Dipper and Mabel.)

Phoebe was also excited to give me the fuzzies that she and Dipper had picked out during the day. I've been all about the Resident Evil Funko line, and they found me Nemesis. As well as the Alien Queen from the Alien series. Phoebe found a Resident Evil manga at Barnes and Noble, that I didn't even know existed. It's called Resident Evil: The Marhawa Desire, and it takes place prior to video game RE6. I snagged the Power Rangers t-shirt from Dipper's Loot Crate, and Phoebe had some more Monster High minis for me. (Yesterday I snapped all the little lockers together. I just have to clean candle soot off the one wall and then hang them. I'm really at a loss as to what to do otherwise!) The little green Cthulhu is part of a series of vinyl toys called Dunnys. Dipper got it for me a little bit ago, but I was able to glue the wings on Friday (they snapped off in shipping).

Although I didn't take pictures of the fuzzies I gave them, that doesn't mean I didn't have fuzzies waiting. I got Dipper the Hulk Mr. Potato Head, which means he's only missing one or two more from the series. I also got him a Deadpool mini figure from Walgreens. I couldn't resist! Phoebe got an Easter egg which turns into a bunny nose, some pens, and I honestly forget what else. I was so happy to see them that the first hour or so is a blur.

I was worn out and didn't feel like cooking, so Tkout ordered us pizza and wings. He got pineapple on the pizza which is basically my favorite thing. After dinner, I did dishes and we sat down to watch Just Add Magic. Tkout changed the filtering on our router, so I couldn't use the Amazon streaming app until he did some legwork. While we waited Phoebe and I decided to do some reading. She's working on the Gravity Falls comic, and I was telling her that not only would Dipper and I be able to read it sooner, but I was sure her dad would count it towards her 20 minutes of reading homework. I sat down with Dreaming in Darkness, which I'm working on so that I can post a review. I chose the couch, because I knew Zelda would come and sit with me and hopefully I could keep her calm. It's difficult to read with a Boston terrier zooming around the living room! Phoebe was over the moon that Chloe decided to sit on the top of the chair Phoebe had chosen.

Chloe likes Phoebe very much, but she's not always up for the kind of attention Phoebe wants to give her. Since Chloe is at least 7 years old (she's a rescue cat so we don't know for sure) she's not as spry as Vampira. When Phoebe is home, Vampira basically lets her do whatever she wants, within reason. Chloe isn't like that. She likes to occasionally play with a toy, but more often than not, she wants to just sit and be petted by whatever hooman she chooses. Treats don't hurt either. Now that Phoebe has learned that trick, she's definitely used it to her advantage, and Chloe's delight. Chloe dozed off while Phoebe read, and on occasion Phoebe would reach up and pet Chloe. Zelda did what I hoped, and stayed with me on the couch. As you can tell from the picture, Phoebe is a truly intense reader and really gets into the story!

I had been dreading seeing it for some time because I wasn't sure what I was in for. Since she's 9, she's at this weird age where her shows are either insipid and torture (Bunk'd, I'm looking at you! Bizaardvark gets honorable mention for really annoying supporting characters.) or they're really fun (Justice League Unlimited for sure!) Just Add Magic was a pleasant surprise for sure. It follows a common recipe - sisters (in this case friends) realize they can do magic, and they use it to try and have a positive impact. In this case, it's a magic cookbook that the girls find in the attic. I like the strong female leads.

It was a really amazing Friday night. As much as I was sad that Phoebe and Dipper didn't stay, part of me was glad because I was absolutely dead to the world once I hit my bed. There would have been no late night comic book talk with Dipper or movie marathon with Phoebe. I would have dropped absolutely dead and stayed dead until late the next morning. There's also zero chance I would have gotten up early to watch TV and build Legos with Phoebe the next morning.

I promised Phoebe the next Family Friday we would play Clue and watch more Just Add Magic. Although I think we will wait for Dipper to go to bed for that last part. I'm not too sure that's his bag. With any luck I can talk her into more Justice League. Or the classic Batman movies. By classic, I mean my classic. It's high time she learned that Batman is Michael Keaton, Joker is Jack Nicholson. And as much as nobody seemed to notice, Harley Quinn pre-transformation in Suicide Squad is a dead-ringer for Kim Basinger's Vicki Vale.

(Just to prove my point, to the right is a snapshot of  Vicki Vale, from Tim Burton's Batman.)

In the shot below, we have Miss Harley Quinn, of the 2016 Suicide Squad. Game over. I win. Right down to the glasses and classy shirt! Oooh..does that make Harley a foil for Vicki? Maybe. That theory will have to be put to the test in another post, another day.) 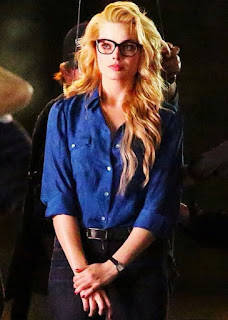