February 05, 2017
I've been working with Dipper and Tkout to show Phoebe iconic movies since this summer. I'm starting to run out of titles that are largely free of major objectionable material, so I'm branching to classics in gene 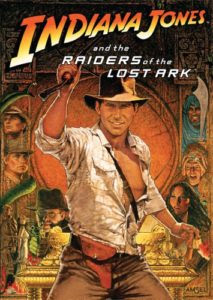 ral. Before venturing further, I should probably clarify, since Texas Chainsaw Massacre, John Carpenter's The Thing, Alien, and JAWS have all been shown. (If you're curious as to the criteria that selects these movies for a 9 year old, check out this post.)

When I was a kid, I loved Indiana Jones films. They had action, scares, excitement, and my first Asian crush, Short Round. When I found
out that Phoebe had never seen any, I almost fell off the couch. I decided to start with Raiders of the Lost Ark, in no small part because Marion is kick-ass. She holds her own in fight scenes, outsmarts the bad guys, smarts off to Indy, and is nobody's damsel in distress. I (correctly) guessed that Phoebe would find her a kindred spirit.

When I started the movie, Phoebe decided to lay down on the cot that I had in front of the tv. On sleepover nights, Phoebe gets the couch, and I sleep on the cot. (I am WAY too old to sleep on the floor for extended periods of time!) She was laying under her new Wonder Woman blanket that I made her for Christmas. She was ecstatic that Chloe, our Bengal cat, had decided to come and snuzzle with her for the movie. Chloe, for her part, is an older cat and likes it best when people just laze around with her and watch tv. (As I'm writing this post, Chloe is behind me on the futon watching a horror movie, and I'm sitting at my computer, which is on a table to the right of the tv. We are both in the basement.) 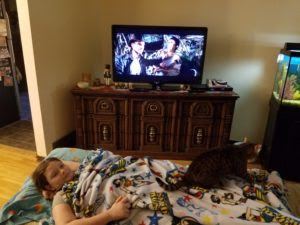 I was surprised that Phoebe wasn't as into the whole sequence with the golden idol and the huge rolling boulder. Until I realized that she'd always been alive for bitchin' CGI effects. As opposed to Dipper, Tkout, and I, who have had a range of effects to experience throughout our lives.

She was ok with the story, but really perked up when Marion (Karen Allen) appeared. She liked that Marian held her own in the bar fight, and that she didn't just hand over the medallion to Indy because he smiled at her the right way.

Phoebe likes behind-the-scenes movie trivia, so she perked up when I told her that during an iconic market fight, Harrison Ford had a bad case of food poisoning. Rather than the elaborate sword battle that was scripted, he pulls out his gun and shoots the enemy instead. If you look closely, you can tell he's not feeling well on that day of the shoot. Phoebe was fascinated by the improv aspect, and the fact that everyone on set just went with it as though it was supposed to happen all along. 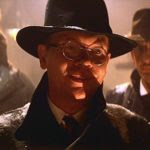 My one regret with this choice, is that it comes perilously close to my self-imposed restriction on overly religious movies. I also forgot that she had no frame of reference for Nazis either, besides a brief explanation I had given her some months ago. I settle for explaining it like this:

"The ark is a big chest that some people believes holds the agreement the Jews made with God. The bad people, Nazis, who don't like the Jews to begin with, want the ark because they believe whoever has it will get incredible power and will be able to hurt lots of people very easily. Indy and Marian want to make sure that nobody gets it, because they don't think people can be trusted. Oh, and the things that look like ghosts that come out of it towards the end of the movie are angels. But people aren't supposed to see angels like that, so a bunch of people who look die."

What seemed like a totally reasonable explanation at the time somehow seems less cut and dry now. Phoebe bailed me out of a potentially precarious situation by asking me if it was like in the superhero shows she watches. I told her yes, think of the creepy guy with the glasses as the big baddie, and Indy and Marian are the good guys. And every bad guy needs someone to hate, so the bad guy hated the Jews, even though they hadn't ever done anything to him. That proved to be a sufficient explanation, and she kept watching. 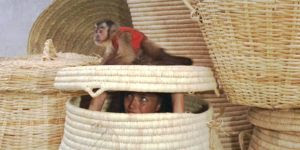 She thought the market chase scene was pretty funny, especially when Marion tried to hide in the basket, and the monkey blew her in. Phoebe wasn't a fan of the monkey when she realized that he wasn't on the side of the good guys, but she later decided that was the fault of the owners, not the monkey itself. She had no such lenience or compassion for the bad guys. When the monkey was poisoned, she sagely decided that was what happened when you threw your lot in with the wrong people. Talk about a teachable moment!

I don't have any experience with children just entering puberty, other than having been a teacher. But in that

regard, in many ways, the parents have already done the majority of the legwork. I was totally unprepared for what transpired when Marion and Indy share a few kisses aboard the train. I will be the first to admit I didn't even remember this scene in the movie. It's short, corny, and didn't make an impression. Basically, Indy is hurt, Marion kisses his boo-boos, he points out a few more (chest, neck, forehead, etc.) and then he falls asleep literally before anything can get moving in any sort of serious direction. By this time, Phoebe was sitting on the couch, instead of laying down on the cot with Chloe. I was crocheting, Zelda was chewing on a toy between us, and Phoebe was working on her Lego set. When suddenly -

"Why?" She sat there, saying nothing. But the face, if only I could have taken a picture! "It's ok, Phoe, he fell asleep."

"Are you sure he's not dead?" I paused the movie.

"How? He looks dead." There's no way this wasn't going to go all the way down the rabbit hole.

"No." I wasn't sure where we were going at this point.

"I don't know, Phoebe. He just gets old. It happens." I was really hoping this would be sufficient.

"Because there's no more movies."

"Why?" Oh shit. She never does the circular why routine...

"Oh." She sits there and thinks this over. I had to strike fast, before she thought of another question that I couldn't answer satisfactorily.

"Good. I don't like it." Just to make sure, she puts her head down and starts working on the Legos.

"Mhm." I got the death-stare for that one. Haha! 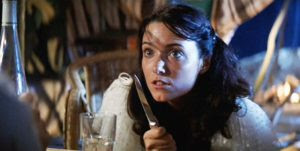 The funniest part of all was that she seemed to hold it against Marion and Indy that they had kissed. Especially when Marion finds herself a prisoner of a Nazi sympathizer. She tries to use her wiles to get out of it. Phoebe was pissed. She thought that Marion was cheating on Indy. I explained that she was pretending, so she could gain the sympathizer's trust, and somehow escape. Phoebe decided that it was a good plan, but she still didn't like the dishonesty. I told her that was a good way to look at it, but to give Marion some slack, considering her life was literally on the line. She agreed.

When the movie wrapped up, I honestly wasn't sure what she would think of it. I was wondering how much the kissy-kissy had weighed into her opinion. As it turns out, even with more kissy-kissy on the horizon, she still wanted to see the rest of the movies. I'm tempted not to show her the 4th movie, because it was so awful. But I think I'll let her make that decision for herself. (I did forewarn her that it's nowhere near as good as the other three.)