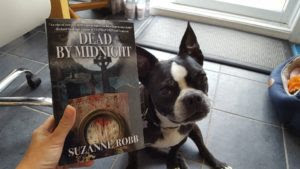 pictures featured our Boston Terriers. (On the right, you'll find a picture of Loki, Suzanne's Boston, serving as her PR manager.) That got us talking, and that's how I found out she was a talented author, and she found out I was a voracious reader with a penchant for reviewing.

Suzanne is quite the writer. I've read different series by her, as well as stories she's published in anthologies. If pressed, it would be hard to come up with a favorite. That is, until she sent me a copy of Dead by Midnight. In the interest of being fair, I did receive a reviewer copy, but it was with the understanding that my review would be honest. Whether scathing or glowing.

I can honestly say that Dead by Midnight is now my favorite of her titles. I first came across the zygote of the story in Were-wolves, Apocalypses, and Genetic Mutation, Oh My! She took what she started, and drew it out not only to full length, but is planning a series. (Amazon already has Dead by Midnight listed as Volume 1.)

The story is rich and the plot is involved. Elliot is the new Chief and detective in Logansville. He partners up with tenacious paranormal reporter Lucy Lane in order to crack the case of a serial killer that's been sending body parts in jars to the police department. Lucy names the serial killer The Moonlight Killer, because he kills during the full moon, and the body parts arrive afterward. 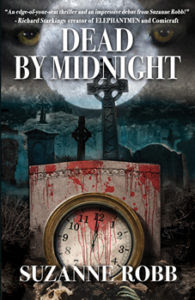 Also tangled up in the plot is Zach Harris, who is a student living with a weirdo and a clingy, gold-digging girlfriend. When he's not studying, or buying things for his ungrateful girlfriend, he's working as a shot boy at Shakers, the local gay bar. Even though he's straight, it's good money, and the employees all think he's the bee's knees. As if Zach weren't living life on the edge as is, one night he's bitten by a werewolf. During the attack, he bites a chunk out of the werewolf's ear. From there, it gets weird.

When the moon is full, Zach becomes a werewolf, while the wolf becomes a man. (Were-man?) During the rest of the time, the wolf follows him around as his pet dog, Buddy. At first Lucy believes a werewolf is the killer, but when she deduces that Zach is a werewolf, she changes her mind. Elliot has enough trouble believing Zach is a werewolf, let alone that the mayor is a vampire, and the whole town is steeped in the paranormal in one way or another.

The race is on - for Zach to clear his name, Elliot to find and stop the killer, and Lucy to find out why Zach has been acting so weird, and get to the bottom of the mystery surrounding the serial killer. Time is running out, every day closer to the full moon is a day closer to the killer striking again!

Dead by Midnight is an engrossing read. The plot is complex, but not to the point of losing the reader. The characters are multi-dimensional and extremely interesting. The supporting characters are just quirky or interesting enough to be remembered, but not to the point of outshining the principal characters. (Suzanne - bring back Ramon and the rest of the Shakers gang in the next books, please!) There are a few red herrings as to who the killer is, but that's good. I don't like reading books where the plot is so thin you see every twist and turn as its happening. Even though I read the zygote story before, it was still a surprise for me when I discovered who the killer was. I have to say, I wasn't expecting that character!

I'm also eternally grateful that Suzanne didn't just end the story after the climactic fight between the good guys and the serial killer. (That's right - no spoilers!) Sometimes books do that - they just drop off and don't go anywhere. Suzanne followed up with the characters and set the stage for the next book. I can't wait to see where she goes from there!

In the meantime, if you're wanting to keep up with the adventures of Lucy Lane, reporter, follow her at her blog, All Things Strange and Unusual. If you're looking to find out more about Suzanne, head to her blog here. When you're on her blog, don't forget to sign up, during which you'll receive a complimentary short story pack including the story that would become Dead by Midnight. (I read it when it first came out, the stories are awesome!)

Once you've read Dead by Midnight, be sure to head on over to Amazon.com and leave a review. Reviews help writers keep doing what they love best!
All Things Strange and Unusual Boston Terrier Dead by Midnight Literature Logansville Lucy Lane Private Acres Suzanne Robb vampire werewolf