Soothing the Beasties with Screams

January 09, 2017
The first pet we adopted when we moved into our new house was Chloe, our Bengal cat. We got her right after we moved in. We tried to add another cat, but she wouldn't put up with it. A year ago, we decided to adopt a Boston Terrier, that we named Zelda. They were alright with each other, but not friends yet. Zelda enjoyed (and still does) pulling Chloe around by her ears, and Chloe for the most part took it in stride. As time goes by, they've gotten closer. The last few weeks, after I was stuck in bed for a week solid with a strep throat infection, they started to make peace with each other. Even though I'm better and have since gone back to work, they are getting closer still. Zelda cries if Chloe isn't in the bedroom with us when we go to bed, and when we wake up, if Chloe has spent the night in the basement, she makes sure we let her out so she can see her friend.

A new development that Tkout and I are really pleased with has been their penchant for snuggling. Although they aren't 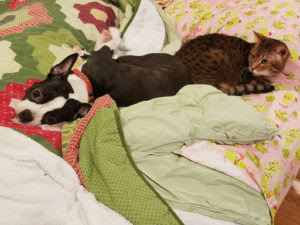 quite a cuddlepuddle, they are still inching closer. We joke that they're trying hard to keep up appearances like they aren't friends. I think the real issue is that Zelda still has puppy tendencies, and sometimes gets a little too ardent, which results in her dragging Chloe around by the ear. If you're Zelda was hanging out, and Chloe decided to get up on the futon and snuggle with her. (Our futon is always down like a bed, and yes, I am a compulsive sheet-straightener.)

The entire week that I was sick, I layed on the futon in our finished basement and watched horror movies. More accurately, I layed there like a sack of potatoes while the fuzzies watched the movies. Now that I am no longer sick, they still hang out on the futon, and when they are restless, Tkout and I can rely on a few movies to keep their attention. (I'm not making this up - they really do sit and watch movies!) Some they prefer more than others, but the list of Comfort Movies that they seem to enjoy best are...

FRIGHT NIGHT (2011) - I'm honestly not sure why the fuzzies love this movie so much. It could have something to do with the nonstop action and killer soundtrack. All I know is that once it goes on the TV, they both lay down and watch.

ALIEN (1979) - Chloe seems interested in what Jonesy, the space-cat, is up to. As for Zelda, this is one of her sleeper movies. I can count on her grabbing a chew toy, settling in on the futon, and falling asleep in about 20 minutes. 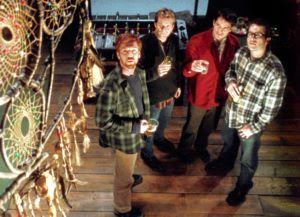 DREAMCATCHER (2003) - This fast-paced Stephen King sci-fi flick is always a good one for getting the fuzzies settled down. Clocking in at an impressive 2 hours and 16 minutes, I think the reason they prefer this movie is they know they are guaranteed a long snuggle session.

AMERICAN WEREWOLF IN LONDON (1981) - This is another guaranteed snuggle session whenever it goes on the TV. Other than that, I think they enjoy the werewolf noises, and the people panicking. (Chloe, especially, seems enamored of people in a state of panic.)

JAWS (1975) - This movie takes place on land, on the sea, and in a boat. There's lots of action, and colorful characters. Not to mention an awesome orchestral soundtrack. Chloe and Zelda make it about halfway, before they both fall asleep. But putting the movie on almost always brings them to the futon.

What movies do your fuzzies enjoy watching?


Now, I know what you're thinking.  Yes this is a media review site.  However, this book is fairly important to me because it was what got me to start learning to crochet.  I was searching for "Cthulhu" one day when I was bored and I came across "Creepy Cute Crochet" by accident.  I went out and bought it the same afternoon (you should have learned by now that I am in impulse buyer of zombies, and anything book related.)

The patterns are ranked in terms of ease, but since I'm still a beginning I haven't done any of them yet.  The patterns are really nice and cover tons of ground with regards to the subject matter.  There are even wizards, Trojan warriors, and Amazonian women to crochet.

This book is a must-have for any crafty zombie lover !  In fact, I was perusing another blog and found out that windgie79 at craftster.org …
Read more