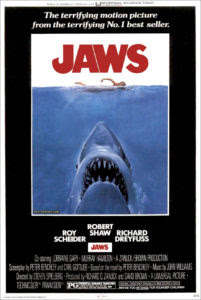 I was beyond thrilled when I found out that Phoebe had never seen JAWS before. When I was a kid, it was my absolute all-time favorite movie. Every Easter, TBS would show JAWS as part of it's animal-themed horror movie marathon. When my parents got me the VHS, I was in my glory. I knew all the trivia. I could recite all the lines, including Quint's harrowing story of the USS Indianapolis. Hell, I used to clean my room while listening to the soundtrack on CD, and recite the dialogue.

I was absolutely over the moon when Phoebe and I got ready to watch JAWS. I made birthday cake and white chocolate popcorn with shark gummies for our snack. (I don't care if you judge me or not, I used to be a teacher. I have no children. I miss being a teacher, and I get overboard excited whenever Phoebe comes over to watch a movie.) We had the living room set up, and Zelda snuggled with us.

I explained that the movie was made in 1975, so in some ways she'd have to lower her expectations of the movie's special effects. I told her that the shark was an actual metal construction, NOT CGI. I also told her that part of it was filmed in a backyard pool, and she asked me to point that part out. (If you're wondering, it's when they find Ben Gardner's boat chewed to hell and back and the head pops out of the bottom of the boat. Classic!) I also told her that the metal shark prop, Bruce, didn't behave at all. It kept sinking and got messed up from the salt water exposure during filming. That last part wasn't very exciting to her, except that she questioned the intelligence of the special effects crew, since they kept using a faulty prop.

Phoebe was absolutely not having it right from the beginning. She chastised Chrissy for 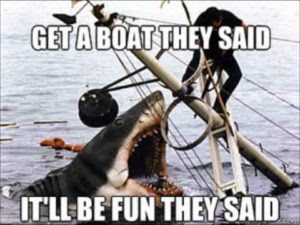 going swimming at night in the ocean and the guy who was with her for being stupid drunk. I think what got to her the most was how preventable the whole scene was. If Chrissy hadn't gone swimming in the dark, at night, by herself, she would have been alright. Phoebe also decided that had she not been hanging around with someone who was so drunk, they might have talked her out of going into the water in the first place. She pointed out how dangerous it is anyway, especially considering that boats can't see you when it's dark.

Right around the time when the town meeting is called, Phoebe had hit her limit. She turned to me and said, "Why don't they kill the shark already?! If it's that much of a problem, kill it!" Her outburst came about 15 seconds before Quint verbally flays the townspeople for their stupidity. She was stupefied when they argued with Quint about killing the shark. She thought he was the most capable (if not batshit crazy) person in the room. (Which, when you think about it, isn't really saying much considering how long it took for the townspeople to decide to do something about the shark.) When the Mayor wimps out and doesn't hire Quint, P decided that he was going to get what he deserved, since he wasn't doing what he should to protect the townspeople and the tourists. 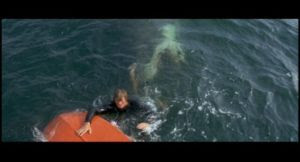 Even though she's seen CGI shark movies before (Sharknado, ugh!), she really liked the death scenes. She thought they were really well done. Especially the guy in the estuary whose boat gets tipped over. She was impressed with the effect of the shark creeping up and snagging the guy off the side of the boat.

She wasn't too thrilled about Quint, but that's because she didn't buy into the shark jumping onto the boat. She figured if that's all it took, the shark could have done that in the beginning and ended the movie right there. However, once Quint was in the jaws of the shark, she was all in again!

What bothered her even after we turned off the movie, was the human element. When Hooper is examining Chrissy's remains, Phoebe thought it was terribly obvious that a shark had killed her. She didn't understand why it took a "shark expert" to figure it out. Phoebe has a really good heart, and I hated explaining to her that people don't always do what's right for everyone. There are people that are only out for what they can get. She was shocked that people would put other's lives at risk, but I told her that you can't underestimate a selfish person.

Phoebe really enjoyed watching JAWS. She's curious about the sequels, especially when I told her that in one of them, a shark takes out a plane. Since she enjoyed JAWS, Jurassic Park, and Arachnophobia, I asked her if she wanted to see Deep Blue Sea, which is one of my guilty pleasures as horror movies go. We will have to wait until everyone's in bed, because Dipper hates that movie. Tkout might be up for it though. (Yes, I have forewarned her that it contains CGI effects, and has a paper thin storyline. But hey - Samuel L. Jackson, Thomas Jane, and CGI sharks!)