January 17, 2017
In January 2011, my boyfriend and I were sitting in his room. He handed me a large brown Amazon box. My eyes lit up, thinking that he went onto my Wishlist and ordered me a box full of books. I opened it, and my jaw dropped. Inside was a green, faux leather-clad nemesis. The Kindle Keyboard. I had ranted and ranted and ranted for days about how much I hated the idea of electronic books the first time Tkout had brought the idea up. He posited that I could more easily read books and then review them if I had a Kindle. I swore up and down that I would never abandon "real books". In fact, I almost broke up with him over it, because I thought that he didn't understand me. That he was trying to change the core of who I was.

A few months ago, as 2016 slogged to a close, I rediscovered my Kindle. I rearranged the books on it, discovered a host of books I had meant to read, and began to take it to work with me. I became quite attached to it. I loved watching the reading progress at the bottom of the book. It gave me a sense of accomplishment, as did moving the book from the Currently Reading book list to the Charnel House Reviews: Read book list.

The first days of 2017 were largely uneventful. The weekend of our anniversary and my birthday, my now-beloved Kindle died. I was outraged and incredulous. I had barely used it! I went straightaway to Amazon to order another one. (In front of Tkout who couldn't stop laughing.) 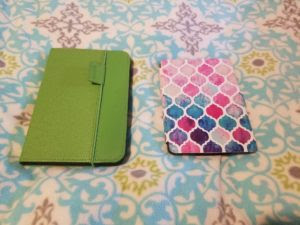 My Kindle Paperwhite arrived Monday. It's Tuesday, and I've barely been able to put it down. I'm voracious when it comes to learning the features, and was delighted when I found out that I could sync it with GoodReads.com, which I have been using more and more. In the picture on the left, you'll see the bigger, greener Kindle Keyboard. Laying next to it is the sleek, super sexy Kindle Paperwhite. (Not gonna lie, I totally feel badass holding it. Even though the case IS paste...)

I absolutely love my new Kindle, but there is a distinct learning curve, despite Amazon's promise that it's intuitive. It is, but only to a point. (If, like me, you're finding the learning curve to be a bit daunting, I will be posting soon about overcoming the obstacles. Stay tuned!) I am obsessed with the cover, the size, and the screen. It's far superior to my Kindle Keyboard, even though I will admit that I miss that first Kindle. It was clunky, basic, and a token of my future husband's love. And as much as I hate admitting it, it's a symbol to me that he knew me better than I knew myself.
amazon Amazon Kindle Kindle Keyboard Kindle Paperwhite TkOut