January 23, 2017
I have been friends with Rhiannon Frater via Facebook since 2013. Her posts are interesting and thought-provoking. Throughout the years, I've read posts on the different books she's written and have always promised myself that I would give them a read. She has several series that I've been wanting to pick up, but haven't been able to choose where to start.

When my Kindle died and I got the Paperwhite, I had to reorganize my books. I realized I already owned The Living 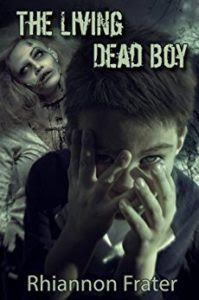 Dead Boy, so I decided to give it a try. I couldn't put it down. To be honest, I can't remember the last time I was so freaked out by a zombie novel. I've read so many and seen so many movies, that, while still enjoyable, I don't find myself really scared anymore.

The Living Dead Boy starts out standard enough. Josh watches the news, and he knows the zombie apocalypse is starting. It's not civil unrest, it's neither riots nor protests. It's the beginning of the end. The problem is that nobody will believe him. Not even the members of the Zombie Hunters Club, that meet to spar and prepare for the end of the world. His mom and dad are sure he's just acting out to cope with the stress of the family's financial situation. While at school, there is a crash on the nearby highway. The principal goes to investigate, and Josh's worry goes into overdrive. He knows this is how every zombie movie starts. With people innocently trying to help the infected. His fears are confirmed when the principal comes back bloody, and orders the evacuation of the school. From there, everything disintegrates rapidly.

What Rhiannon brings to the table is raw emotion. She creates palpable tension between Josh and his younger brother, Drake, whom he resents for getting most of his parent's affection. (And for getting him in trouble, as younger brothers will do!) There's a scene in particular that I had to reread several times, because it was so deeply troubling. The kid's bus has crashed and they've escaped. As they're going down the road, Josh looks back and sees a zombie dragging itself towards them. Hungrily. Inexorably. It's everything a zombie story should be.

There are more really freaky scenes, but I don't want to deprive the reader of the ghoulish fun of reading The Living Dead Boy for themselves! Not to mention, there's a sequel that's already available. It's called Lost in Texas: The Living Dead Boy 2. Reading the quick synopsis on amazon.com, it looks like Josh and his friends aren't out of the water yet. The second book finds them travelling through a zombie-infested Texas looking for safety.

If you're looking for a genuinely scary book with loads of heart, do yourself a favor and pick up The Living Dead Boy. Make sure to leave a review on amazon.com, goodreads.com, and anywhere else you can.
Literature Rhiannon Frater The Living Dead Boy zombies