Anyone up for a little Virgin Sacrifice? 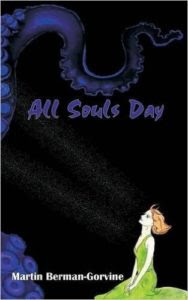 I've been sitting here at my computer for fifteen minutes trying to figure out how to begin this review. I don't want to give away any plot spoilers and deprive the reader of the sheer force of the gut punch that Martin Berman-Gorvine delivers. On the other hand, I am all but bursting with excitement to tell you about this book.

I consider myself to be well-read in the horror genre, and All Souls Day by Martin Berman-Gorvine still knocked me on my ass. Hardcore. The story takes place in an alternate 1985, where the Cuban Missile Crisis actually triggered World War III. The war laid waste to the United States, paving the way for the ancient god Moloch to rise. If the name sounds familiar, Moloch was mentioned in the Old Testament, where his worship is expressly forbidden. (A quick Internet search reveals that Moloch was closely associated with child sacrifice, if that's any indication of the mindset of his followers!) A closed off suburb of Philadelphia, Chatham's Forge, is run by the evil Pastor Justin Bello, who rules as the right hand of Moloch. Any other worship is forbidden, causing Jews and Christians to hide their true religions. If they don't, Pastor Justin will make a terrible example of them, because public torture and execution are alive and flourishing in Chatham's Forge. Moloch himself guards the suburb, and has insidious ways of dissuading the inhabitants from leaving and joining the "muties" outside the wall. As is true in so many societies, there is a fierce us vs. them component, and the townspeople are led to believe anyone outside the wall is a horrific mutant. Corrupted by the nuclear war and the absence of their god, Moloch. This allows for raids into the wasteland, where the muties are captured, raped, and killed with reckless abandon by the raiders.

In the middle of this hellish society are our main characters. They are stymied by a caste system that keeps everyone in a high school mindset for their entire lives. There are Nerds, Jocks, Nice Girls, Sluts, Jesters, and Punks. While it's possible to be demoted to a lower caste, it's impossible to be promoted, and just as impossible to date outside your caste.

Nerd Amos longs to openly date Nice Girl Suzie. It doesn't seem fair that his friend Tom, a Jester, can openly date Suzie's best friend, fellow Nice Girl Vickie. Throughout the story, Amos, Suzie, Tom, and Vickie struggle against the harsh caste system, the oppressive rule of Pastor Justin, and the rebellion and resentment they feel towards Moloch. At prom, the alpha Nice Girl is chosen to be the virgin sacrifice for Moloch. She is taken to an old armory known as the Castle, where she lives in isolation for five months before being served up to Moloch, tied to the hood of a car. As if that weren't bad enough, Moloch isn't exactly quick in terms of accepting his sacrifice. The virgin sacrifice faces a gruesome and agonizing death, and all so that Moloch will leave the rest of the people alone, perpetuating the survival of the sick and twisted society.

All Souls Day was an absolutely amazing book. I couldn't put it down, and raced through it in a matter of days. The whole time I read it, my mouth hung open. Martin is very detailed in terms of his world building, but not so much as to be intrusive. Instead of setting the story with the entire layout of the world, he lets the reader take it in, a little at a time. It's so complete, and it feels like everything is accounted for. The part that floored me the most was the treatment of religion. One of the main characters is Jewish, and the family practices in secret. Rather than expressly stating it, Martin left little clues here and there, until finally the subject of Hanukkah is breached. As it turns out, there are practicing Jews and Christians stuck in the midst of the others. They are forced to hide, as has happened so many times in history. Jews are considered extinct, and I use the word because they are spoken of as almost another species entirely by the people who worship Moloch. I wasn't expecting that level of detail, because most of the time authors merely state what's going on in the world of their characters. Martin brings it to the reader, and dumps it on their lap, forcing them to confront the harsh reality that the characters live in.

When I finished the book, I immediately emailed Martin, and sure enough, this is not a standalone. I am itching for the next book to be released, because the ending of All Souls Day is not only a complete shock, but I'm dying to know what happens to the characters next. In the spirit of fairness, I will say that Martin approached me two years ago with an advanced reader copy, in exchange for an honest review. Personal circumstances caused me to put the book aside, and I only recently was able to read it. I am kicking myself for not having read it sooner. I also plan on delving further into Martin's catalog in order to see what other gems he's been hiding.