January 30, 2017
This past weekend was a total shitshow. I'm not going to go into it further than that, because the medical issues involved were (largely) not my own. What I can say is that I backslid in terms of my anxiety, but I am fighting my way out. I am guessing the next few days will be rough, but I am toughing it out as best I can.

Sunday afternoon, Tkout and I went on a date to go see Resident Evil: The Final Chapter. Dipper had suggested we take a break from the stress of the weekend and have a small date. I was worried that I wasn't going to do well, since I have been h 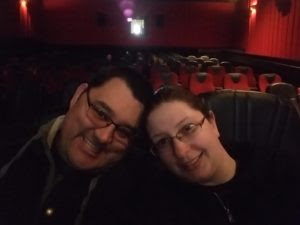 aving trouble in packed theaters. That didn't happen to be a concern, since there weren't more than 13 people in the whole theater.

For those readers that maybe haven't been following the series closely, this final movie is meant to close the franchise and answer some unanswered questions, and clear up inconsistencies between the other films. The film opened in theaters on Friday, January 27th. The Final Chapter received mixed reviews, some people loved it's action-driven scenes. Others were nonplussed with the offering as the conclusion to the long-running franchise. 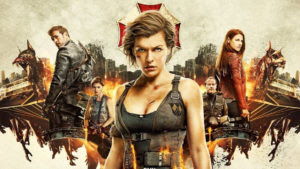 I fall in the middle. But that's not really surprising, considering I do for most Resident Evil movies when I first see them. The plot of this one had me intrigued from the start though, because it was a return to the Hive. Basically, Alice needs to save humanity from extinction, and the answer to that problem (as well as answers for questions she and the audience have had for years) lie where it all started. Below the bombed-out remains of Raccoon City, in the Hive.


I'm a fan of the franchise, so I'm going to go full-tilt fangirl and say that the movie was a blast. I'm extremely glad I got to see it on the big screen, and even happier that it was left open-ended. I wouldn't mind if the franchise kept going. I know Resident Evil: The Final Chapter just came out in theaters, but I can't wait to own it! That way I can have a weekend-long marathon with all movies included!
Ada Wong Ali Larter Chris Redfield Claire Redfield Dr. Isaacs Ever Anderson Fraser James Iain Glen Jill Valentine Luther Milla Jovovich Movies and TV Resident Evil: The Final Chapter Rola Ruby Rose Shawn Roberts Wesker