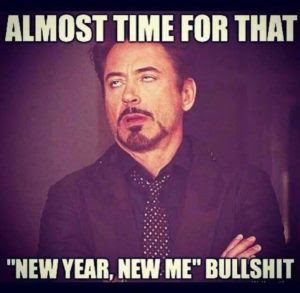 I used to love New Year's Resolutions, or rather, the idea of them. My longest running streak is most likely somewhere around about 9 days or so. I don't expect this year to be largely different, because when you try to change your behavior, there are always setbacks. And do-overs. And moments when you basically nuke any progress that you've made. But you see, I'm ok with that. After everything that happened last year, I'm inclined to think that it's not so much an annual thing, as it is an every day thing. They say that you only stop learning when you die. I intend to make that the case.

Here's to a New Year, and all the shit that goes along with it!
New Year New Year's Resolutions