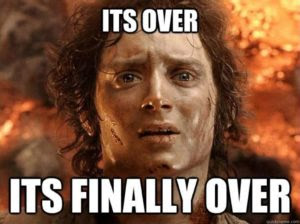 This morning I was looking through my "On This Day" section of Facebook, where you are able to peek back through the years at some posts. I'm not sure what algorithm is used to determine what posts show, but there is a definite trend. Each year, I hoped that I could leave behind a bad year, and go valiantly into the next.

Let me tell you, 2016 was a whopper. To the extent that I am ready to consider it a circle of Hell unto itself. The eve of my 30th birthday was spent surrounded by my friends and family, in the house of my deceased grandparents, celebrating the life of my deceased Uncle Bill. That occasion marked the close to a strange series of deaths in my family. My grandmother passed in July 2015, my grandfather in December of 2015, and the day of his wake, we lost my Uncle Bill unexpectedly.

From there, things continued downward at an alarming pace. In November of 2015, I had begun fighting my then-employer over a harassment issue. To put it succinctly, they failed to protect me, and then blamed me for the events. In March, my mother was hospitalized. That night, something broke. I fell into the worst depression I have yet suffered. I'm not sure it was a nervous breakdown, although that's what I tell people, because it's easier to understand. So far, few people have understood the description "my world came to a halt, and I fell off into purgatory". That night, I had hit my breaking point. I was ready to take my life. Over the next few months, while my mother's health spiraled downward, my husband and brother fought daily to save my life. I became despondent, and couldn't see all there was that was worth living for. I just wanted the pain to end. I saw my doctor, and was prescribed Lexapro for depression and anxiety, as well as formally diagnosed. I applied for FMLA at work, so that I could take time off without penalty while I crawled my way towards safety.

Over the summer, I watched my niece twice a week, attended her soccer games, and spent time with my brother and husband. My brother is technically my best friend, and although we are not related by blood, we are nevertheless connected deeply. He's got a few years on me, but we are twins in more ways than people I know who ARE related by blood. We walked in parks, went to shops, and tried to reclaim parts of ourselves that we had lost for one reason or another.With Phoebe, I watched movies, did crafts, and hung out with my pets. She lavished the menagerie with love and they loved her right back.

Lexapro was a joke. It was like wrestling a pissed off, rabid grizzly bear. When the meds kicked in, everything would get worse. In fact, the first hour after taking it, I was a complete mess. My brother suggested I change meds. My doctor gave my Zoloft, which was infinitely better. I'll admit, every time the dose changes, things go haywire for about two weeks. But that's ok. At least it evens out eventually. I also started seeing a therapist, though I don't remember exactly when that began.

Peter, my therapist, is a strange man. He's slight and grey, and very quiet. During the sessions, he doesn't talk much, just sits back and lets me work things out. At first I found this endlessly frustrating. Over time, I've come to realize that he follows the tough love advice my brother gives me (when I need it most). That advice is that sometimes, you just have to do it for yourself. Nobody can do it for you. So far, he's been right. There's times I can be helped, but I'm learning more and more that I have to find ways to self-comfort.

Through all of this, my parents and I experienced a schism. For the first time in my life, I didn't feel as close to them as I had always felt. They didn't realize the depths of my depression, but in many ways that's forgivable. Especially considering I wasn't there for them during mom's myriad medical disasters this year. My brother recommended that we just chalk it up to the fact that dad and mom, and Panda, Dipper, and myself, were all battling different sets of troubles and call it even.

And yet, despite all the chaos, 2016 was a blessing as well.

Through the hardships we endured, and with Dipper's guidance and help, my husband and I have become much closer. We have crossed bridges together that we didn't even know existed. We also strengthened our connections with Dipper and Phoebe. I have changed jobs, and found a company that I enjoy working for, that also values me in ways my old company didn't. My backbone has emerged since having to go through so much, and I have learned who I can count on, and who I can't.

I can proudly say that I have survived 2016, a little worse for the wear, and definitely stronger for having weathered the storm. I am ready to meet the new year on my feet and standing tall, because I know that the people I love, love me just as deeply and loyally as I love them.