I spent the summer watching my niece a few days a week, which was awesome. She's super smart, sweet, and very fun to hang around. But I have to say, you can only see so many Scooby Doo episodes before you begin to question your sanity. I brought up the idea to Dipper of starting to introduce her to more adult horror movies. He gave me the green light.

The first movie we watched was the 1979 classic, Ridley Scott's Alien. Dipper and I figured it would 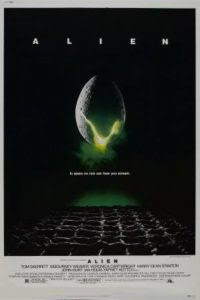 be good to start with. Interesting but not overly-verbose plot, strong female lead character, suitable horror with little gore, and the pièce de résistance...a cat. My niece will watch ANYTHING, so long as there is a cat involved.

Phoebe and I piled up the blankets and pillows in the living room, got my Boston Terrier a few toys so she'd stay with us, and snagged some snacks from the pantry. Capri Suns in hand, curtains drawn, we began the movie. The opening parts kept her interested because she was looking to see the cat. The real fun began once the crew of the Nostromo encountered the alien ship.

When Kane began descending into the egg chamber, Phoebe turned to me, furrowed her brow, and asked, "Miss Holly? Is he stupid?" I explained he wasn't stupid, he was exploring. She wasn't quite convinced, but agreed to keep watching. When the facehugger attacked Kane, she said "That's what you get for not being careful!" Try as I might, I couldn't disagree.

Fast forward. The Xenomorph is rampaging on the ship, the crew are starting to die, and Ripley's damn cat is nowhere to be found. After the captain gets killed in the airshaft, Phoebe paused the movie. I asked her if it was too scary.

"Why is everyone so stupid?"

I sat there staring at her, literally unable to answer. I thought she was kidding. I burst out laughing, and she took offense. Apparently she was serious.

"What do you mean? Why do you think everyone is stupid?"

"Because they are. They're not really fighting the alien and it keeps killing them. And nobody is looking out for the cat. They better not hurt the kitty!" 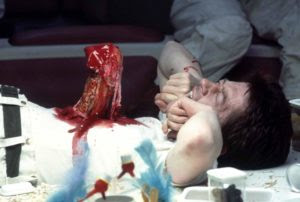 I couldn't really argue with her logic. I am an animal-lover, and Xenomorph or not, my animals would be on my mind too. I tried to reason with her. Then, in order to restore peace and order, I had to spoil the movie. I told her the biggest secret of all...JONESY LIVES. All the way to the end. She thought a bit on this and then...

"If they weren't stupid, we wouldn't have a movie."

In case you didn't know, there are some arguments you don't win against a nine year old. Especially not a smart one. I thought that was the end of our discussion on the merits of having smart horror movie characters. We continued watching.

Prior to putting on the movie, I had prepped her for the chestburster scene. Truth be told, it was the only scene Dipper and I were unsure of her reaction. I felt like I was spoiling it for her, but I told her a little about it, and that the cast didn't actually know what was coming. The reactions in the scene are priceless - most likely because they're genuine. Irregardless, Phoebe loved it. She leaned forward, and watched with rapt attention as Kane writhed and screamed. Her eyes got as big as saucers when the chestburster appeared, and she roared with laughter when it ran amok. I couldn't help but laugh with her. Though it was a serious scene, there was a certain charm and hilarity watching the ugly little bastard run through the set. 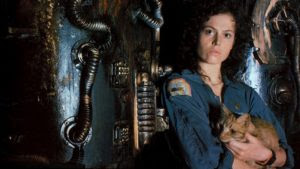 According to Phoebe, these are the only two characters worth watching.[/caption]

"Yes you could," she says confidently, apropos of nothing. "You could have a movie where everyone wasn't stupid."

"I guess you could, but it wouldn't be very fun, would it?" I wasn't sure where she was going with this line of inquiry.

"Yeah it would! They could find the alien, fight it smart, kill it, and move on. With the kitty."

I told her I would have to think about that and get back to her.

Her final take on the movie was that it was excellent, but she wished there was more of Jonesy the cat. She loved that Ripley took charge and (for the most part) made smart decisions. She was shocked to the core that Ash turned out to be an android, and asked why Ripley didn't know that. She thought that was silly, considering androids were part of their everyday norm. She was suitably horrified that Ash had been tasked with bringing back an alien organism, and that she was glad it hadn't happened. Most of all, she wanted more Jonesy. In the end, it turns out that my niece doesn't care about the human body count, especially when they're stupid humans, she just wants to know the animals make it out alive.

She is very interested in seeing the other Alien movies, though at another time. The second one is more of an action flick, and she's significantly more curious about "hardcore horror" movies. Preferably with cats. Our movie watching has continued, as I see her twice a week, and every other weekend. Be on the lookout for more of Phoebe's take on popular horror and sci-fi movies!