What do you mean 'the alien killed the dogs' ?! 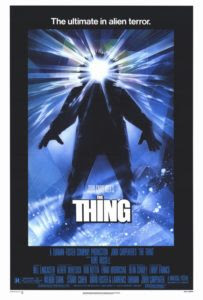 Over the summer, I showed Phoebe one of my favorite movies of all time, John Carpenter's The Thing. I thought it would be a good one to show her because the effects, while still looking good, aren't as realistic as some of the more modern movies. I also thought she'd like the psychological guessing game - wondering who survived and who was an alien.

It surprised Dipper and I when it took me two tries to get through the movie with her. As it turns out, The Thing is a little too heavy on talking, and a little too light on the alien massacres. She wanted less discussion and more alien transformations. The second time through, I prepped her that once the proverbial ball got rolling, it was a bloodbath. That seemed to satisfy her. She picked out a craft, and we continued the movie.

Just like with Ridley Scott's Alien, Phoebe was all about the animals. In fact, the movie opens with a helicopter flying low over the snow, shooting at a beautiful husky. I would be doing her a great disservice if I said she was merely disturbed. I think the phrase, "losing her shit", while a bit crass, is a better approximation of her reaction.

"WHY ARE THEY SHOOTING AT THE DOG, MISS HOLLY? ARE THEY GOING TO KILL IT?" Now, it's important that at this juncture, I point out that her speaking in capitals is not because she was yelling. Her eyes were the size of the moon, and her body was very still. She was speaking very carefully, emphasizing every single word.

"Phoebe, it's great that you ask questions and you're curious, but you're gonna spoil the movie for yourself."

"THEY KILL OTHER DOGS?" Shit. I shouldn't have let that slip.

"Well, not the humans. More like the alien comes and kills the dogs."

"Oh. Do the humans kill the alien?"

I was at a loss. I was about to spoil most of the movie. Having learned my lesson with Ridley Scott's Alien, I proceeded thusly:

"The whole fun of this movie is that at the end, you don't know if the alien is gone or not. Yes, the alien kills all the dogs --"

She considered that for a moment. I could tell she still wasn't happy with the dogs dying. After a little more consideration, she shrugged and told me that the humans were stupid because they let the alien kill their dogs. I tried to explain that they weren't necessarily stupid, more so that they just didn't know what they were dealing with. I tried to explain that as the viewer, we are omniscient, and having that to our advantage, can suggest better courses of action for the characters. She then told me that if she were in a horror movie, things would be different, chiefly because she wasn't stupid. (That, however, is a topic for another post at a later date.)

Her final decision on the movie was that it was alright. She didn't like the alien wiping 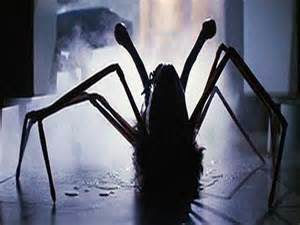 out the dogs, and she would have liked a better idea of who was human and who was an alien. Not knowing made it confusing sometimes. Not to mention there were several characters to track, but not much real character development to help her keep them separate. She also wasn't terribly impressed with the special effects, until I told her that the movie was made in 1982, and without the help of computers. Once I explained how the special effects artists (Rob Bottin's work was fantastic!) she began to appreciate it a little more. I promised the next movie would have less talking, and more straight-to-the-point killing.
Charles Hallahan David Clennon Dipper Donald Moffat Joel Polis John Carpenter John Carpenter's The Thing Keith David Kurt Russell Movies and TV Peter Maloney Phoebe Richard Dysart Richard Masur Rob Bottin T.K. Carter The Thing Thomas G. Waites Wilford Brimley