October 11, 2016
Yep. That's right. I can say with a completely unrepentant heart that I showed my nine 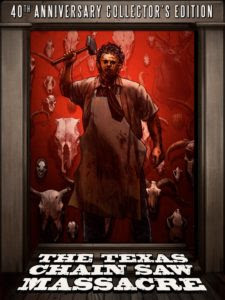 year old niece Tobe Hooper's The Texas Chainsaw Massacre. Now, before you go and start a village mob, consider this...

...there is no nudity nor is there sex in the movie. (Honestly, the characters don't live long enough for either.)

...there is relatively little gore, and much is left to the imagination.

...there is no drug or alcohol use (Again, the characters don't really live long enough to partake.)

...I watched that movie when I was seven. Two years younger than her. And look how I turned out! (Well, maybe scratch that piece of evidence...)

Not to mention, I had discussed this choice with Dipper thoroughly.

When they arrived at my house that morning, I pulled out the DVD and showed her. I let her read the synopsis on the back, and asked her if she would like to see it. She was very excited, because as she explained, it wouldn't be before bedtime and wouldn't possibly give her nightmares. She asked if it was about a monster, and I told her it was kind of like a grown up Scooby Doo in that the monster was actually a human in a costume. (I challenge you to now disassociate Scooby Doo with Leatherface.) She LOVES Scooby, so her decision was made.

Once again, we got our pillows and blankets, and Zelda (my Boston Terrier) and set up in the living room. I got our snacks and Capri Suns read, and we began the movie.

She wasn't too impressed with the opening images of the corpses set up on the tombstone. Nor was she interested in the preface. But once the unfortunates picked up the hitchhiker, she was hooked. Not only that, but she had a scathing commentary throughout the entire movie.

I had never asked her what she knew about hitchhikers, and truth be told, wasn't sure she'd ever given it a thought. But when the hitchhiker went crazy and cut Franklin, and smeared his blood all over the van, she couldn't help herself.

"He looked creepy. Why did they pick him up in the first place?"

"Because this movie is set in the 1970s, and people acted differently back then. They gave rides to strangers because they didn't think anything of it."

"Right. So they saw creepy people at the side of the road, and they picked them up? And then were surprised when they got hurt?"

Sensing a teachable moment, I explained that looks don't necessarily mean anything. A hitchhiker could look like something out of a Gahan Wilson drawing, but be harmless. Likewise, the most attractive hitchhiker could be a serial killer. I cautioned her to never pick up someone on the side of the road, no matter what, just in case. To my surprise, she rolled her eyes and said, "Everyone knows that! That's how you get chainsawed! Speaking of which, when does that happen?"

Aaah. Out of the mouths of babes. She and Zelda snuggled closer, and we kept watching. The actions of the characters baffled her. She couldn't quite figure out how they kept getting themselves into worse and worse situations. For example, when Pam went into Leatherface's house and saw all of the bird feathers and skeleton parts, Phoe couldn't figure out why she didn't just turn around and get the hell out of dodge. I explained that she was scared out of her wits, but Phoebe said she should have been better at getting out of the house if that were the case.

She couldn't stop laughing when Franklin got whacked with the chainsaw in the middle of the bushes. Phoebe couldn't figure out what in the hell he was doing out there in a wheelchair to begin with. I tried to explain to her that he was searching for his friends, but the explanation died on my lips. There were other ways to look for them than go charging off into the bushes in the dead of night.

All told, she really enjoyed the movie. She actually asked to watch it again a few days later, so we did. She liked that it was straightforward. In her words, "They were stupid, they got chainsawed." She also liked the effects - the fact that the kills weren't overly gory. She realized extreme gore isn't to her taste when she saw the Sharknado franchise. (I take no credit for that. I wouldn't have shown that to her.) She's interested in seeing the rest of the franchise and the other movies in the Texas Chainsaw family. Maybe one day. I'm not sure I'm ready to show them to her. To be honest, the original is the most unique, and I don't want the charm of it to be lost to her by overburdening her with the others.

As a side note, Dipper and I missed out on our chance to meet Gunnar Hansen, Leatherface himself. After coming to a convention near us ended, he died unexpectedly. From what I hear, he was a wonderful person. I wish I would have had a chance to meet him.

I should also take a moment to give a shout-out to my husband, Panda. He bought me the 40th Anniversary Edition of the movie pictured at the beginning of this post. (That's right! 40 years. Can you believe it? I can't!)