How to Survive Killer Spiders....According to Phoebe 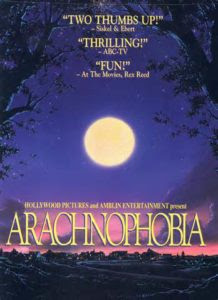 For a change of pace, I decided to show Phoebe the (in my mind) classic Arachnophobia. I couldn't believe she had never seen it before. Now, while writing this post, I realized the movie is from 1990. She wasn't born for another seventeen years. Shit. You. Not. Anyways...

...she got a kick out of the idea we were going to see a spider movie. I hadn't as yet made my peace with spiders. Which means she was used to me wailing for my husband to come and deal with them in the house, and running from them when I encountered them outside. She thought she was going to watch me cringe and squeal, which was the majority of the appeal. (Recently I have begun to appreciate spiders for their intricate colors and markings. Not to mention, their practicality. I was lamenting the size of the spiders in my basement to someone, and they told me, "You think they're ugly? Just think of the ugly things they're eating to get THAT big." For the most part, they now get either a photo session if they're particularly interesting, or a wide berth. If they become truly problematic, I have no doubt my cat will happily dispatch them.

Phoebe made sure to snuggle Zelda tight, so that the little Boston wouldn't fear the spiders. (I only know this because I heard her whispering to Zelda that she would keep her safe, and then covering her with a fuzzy blanket.) Zelda was all for it, stuck her nose out of the blanket, and the movie rolled.

Good. Lord. There is nothing quite like getting a talking to from your niece. You see, I completely forgot to tell her that there are a few scenes where the spiders menace cats and even a dog. None of the animals are harmed, but it's a close call. Each time it happened, she would hold Zelda more snugly, and I'd hear:

"MISS HOLLY! THE [insert animal species here]! DOES THE SPIDER GET IT?!" her voice laced with concern, panic, and consternation.

Quickly, I gave up on telling her to watch and see. That went over like a fly in mashed potatoes, let me tell you. I gave in and told her the animal makes it, most times the person doesn't. She is nothing if not consistent, and was completely alright with the ratio of animal survival to human death and suffering. (The only change in pattern was the crow. She was totally ok with that dying.)

Poor Manley, the unlucky photographer. He was pretty much a running joke for her the 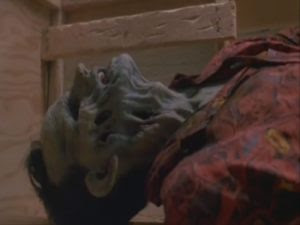 whole film. She couldn't figure out why he had agreed to take the photography job with Dr. Atherton if he was so terribly afraid of insects. It was, after all, an insect-finding mission. Nine year olds not only have the funniest way of looking at things, but they also ask the best questions. She wanted to know why Manley's body looked so weird in the coffin when it reached Canaima. I explained that the spider got in the coffin with him and that's how he wound up in California. Phoebe asked what that had to do with the body, and I explained that the spider had been snacking on it. She asked if that was possible, and I told her it was highly exaggerated. Some spiders do save their dinner, but not to that extent. After some more examination, Phoebe decided that not even a big Amazonian mf'er of a spider like the one in the movie could do that to a person.

Most of all, she was completely and totally disgusted with Dr. Jennings, Dr. Atherton, and 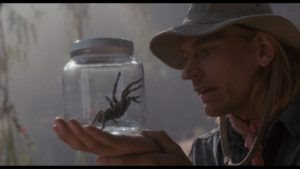 Delbert McClintock. She couldn't figure out how Dr. Jennings hadn't seen the spider bites on the victims. After all, he was a doctor. When Dr. Atherton twangs the gigunda spider web and gets eaten, all she had to say was, "Well, he was SUPPOSED to be the expert. Guess he didn't know you don't play with spiderwebs." And poor Delbert McClintock? What kind of exterminator was so unprofessional?

She loved the ending of the movie, when all of the spiders hatched at the Jennings' house and ran amok. Some of her joy was ultimately stolen when I told her that they couldn't, in good faith, use real live venomous spiders in the movie. That day we learned the words "liability" and "ethical". I explained to her that you just couldn't put actors in harm's way for a movie. This greatly disappointed her, and she said that it affected the movie's authenticity. Phoebe is nothing if not a realist.