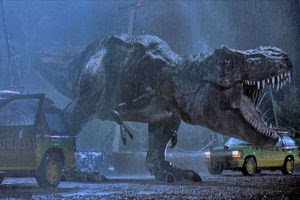 The day started out like any other. Dipper and Phoebe came over to visit. Phoebe grabbed up the blankets and pillows for the living room, and then set about playing with Zelda. I was hellbent on not having to watch another episode of that insipid show Walk the Prank, so I asked her, "Hey Phoe, wanna see stupid people get eaten by dinosaurs?"

Her eyes lit up like the Rockefeller Center Christmas tree. "YES!"

Thus began our adventure of watching 1993's Jurassic Park. As it turned out, she had seen the newest movie, Jurassic World. I shook my head. How can you see these movies out of order?

I had been planning on showing her Jurassic park, so I pulled out our themed snack. I 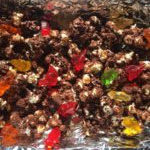 had made chocolate-covered popcorn with dinosaur gummies. (Yeah, I know. I used to be a teacher.) They're based off this recipe for Shark Bait Popcorn. I played with the type of cake mix as well as the gummies. It came out great! The chocolate was sickening sweet! And so were the gummies. The kiddo got ramped up, I straight up died and slept through part of our movie. 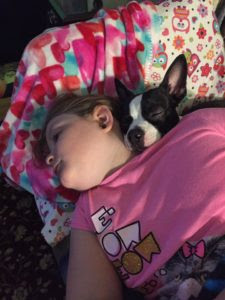 Phoebe and Zelda took up the couch. Like, the WHOLE couch. And wouldn't you know, my dog settles right in and snuggles up to Phoebe. I don't know what it is about Boston Terriers, but they LOVE children. That dog lets her get away with murder. Every time. It's seriously the cutest thing in the world. But I digress. I wound up in the armchair, trying to crochet a blanket and listen to her maniacal laughter. Apparently it's obvious to EVERYONE that you shouldn't clone dinosaurs. Or put them in a glorified zoo. Or run when in the presence of a tyrannosaurus rex. Basically, when the shit hits the fan, all you need is Phoebe. To hear her tell it, she's the undisputed survivor of every type of situation. Which may sound sarcastic, but seriously. This kid has things figured out QUICK.

She wound up loving Jurassic Park, which accidentally started a marathon of all the movies. I'll leave the other reviews for other posts, but suffice to say, she's an adorable little ham. It's worth noting too that Jurassic Park is a stellar movie for a young girl to watch. Despite being made in 1993, it features strong female characters. Both Lex and Ellie are strong, capable women who don't spend the whole movie waiting to be saved. Dipper and I like showing Phoebe those kinds of movies. We want her to grow up to shatter glass ceilings, and never put limitations on herself. Not to mention, it's a stellar way to introduce the little sweetie to Samuel L. Jackson, in one of his earliest roles.

She's not as much of a fan of my movie trivia bits sometimes. I regaled her with stories about how the impressive dinosaur sounds were, in fact, modified tortoise noises. (I left out the part that the sounds were tortoises mating, but maybe when she's older...)
Ariana Richards Bob Peck Dipper Jeff Goldblum Laura Dern Martin Ferrero Movies and TV Phoebe Richard Attenborough Sam Neill Samuel L. Jackson Zelda