May 02, 2016
Clearly I'm on an old school horror kick tonight. The next movie in the marathon is The Creeping Flesh. I'm apparently having a marathon secondary to the theme of old school horror, as I inadvertently chose another Christopher Lee and Peter Cushing film. Which I am ALL ABOUT right now. The Creeping Flesh is from 1973, and although a bit dated, includes very well done special effects. This is another of Dipper's recommendations.

Not going to lie, this movie synopsis has given me the most trouble of almost any that I've written recently. Put plainly, the viewer can tell at the start of the film that any peace and quiet in Cushing's life is 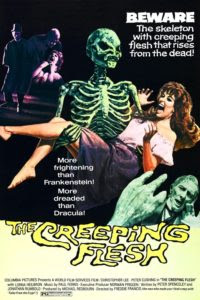 balancing on spidersilk, because he can't seem to put anything in order before rushing off to the next project. For example, he has spent the last year in Papua, New Guinea, chasing the origins of mankind and proof of evolution. When he comes back, it turns out that the estate's finances have been dwindling, and his daughter has had to let go of two of the servants in order to make ends meet. To the extent that his brother, played by Lee, has been funding his expeditions. As if that weren't enough, she's distraught and pining for the mother she believed died when she was  younger. She's been struggling to find some scrap to tie herself to the mother she barely remembers. The truth, it turns out, is far worse. Her mother has recently died, in an asylum run by Lee, no less. It would seem that not only is Cushing's life a mess, but so is Lee's. Shortly into the film, one of the asylum inmates breaks free and is on the loose.

In the forefront of all of that chaos, is the discovery that Cushing made while in New Guinea. He has brought home with him a massive skeleton, one that creates more questions than it answers. It's extremely old, but far more advanced. A paradox which intrigues Cushing to the extent that he basically forgets everything else around him. (Including his daughter starting to nose around in her dead mother's locked room - which can't be a good thing by any means! It's worth noting that while poking around in her mother's room, she discovers the truth of her mother's committal in the asylum.) While examining the bones, Cushing decides to wash them off, and takes a wet towel to the hand. He quickly discovers that the flesh reappears on the bones when water is applied. He's curious, so he removes one finger and allows the flesh to regrow. 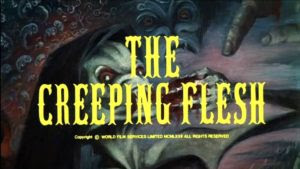 While reading up on the legends of the region and searching for some clue about the bones, Cushing comes across a legend about a race of giants buried deep. They were supposed to be exposed slowly as the earth eroded around their bones, and a rainstorm was supposed to facilitate their return by fleshing out the bones. They were supposed to be the ultimate evil, and the legend says that by the time they are out and causing havoc, the peoples in New Guinea were supposed to have evolved enough to be able to fight them. (Holy mackerel! Such detail!) Cushing makes the leap that he can develop a serum against evil from the flesh - how the hell he came to that conclusion is kind of foggy - and begins to test it. Meanwhile, a thief enters Cushing's lab and attempts to steal the skeleton, but winds up just exposing the whole thing to a rainstorm.

Cue unspeakable evil amid a backdrop of a deeply dysfunctional family, and you've got one helluva creepy classic! Once again, Cushing and Lee do not disappoint. The film is very well acted, well written, and very complex. If you're looking for a solid creature flick with interesting characters, I would highly recommend that you see The Creeping Flesh.