May 02, 2016
Tonight is my night off - and I'm spending it in the nerdiest way possible. I'm working on crocheting a temperature blanket and watching horror movies.  (For those that don't know, a temperature blanket is a year-long project, where every day the highest or lowest temperature is recorded, and a row is added to the blanket with a color corresponding to the temperature.) I haven't watched any movie recommendations from my brother lately, so tonight I decided on Dr. Terror's House of Horrors. To be honest, it was an arbitrary pick. I don't remember him specifically recommending it, but it's on a list of movies he has watched, so I figured what the hell. Anyways, it's always good to discuss old horror with Dipper, who is very knowledgeable. 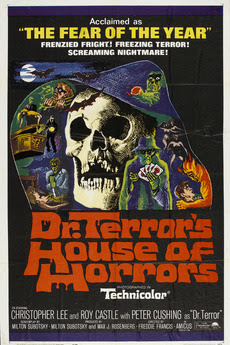 I was immediately pleased to see that Christopher Lee, Peter Cushing, and Donald Sutherland were in it. (Kid you not - Donald Sutherland looks just like his son, Keifer, in this movie!) I'm sure there's other actors that I'll recognize, but none by name.

Dr. Terror's House of Horrors is an anthology movie, or rather, it's composed of several stories woven together by a central theme. The mysterious Dr. Schreck tells the fortunes of five strangers on a train. Each fortune is a story about their future, and the horrors that will befall them. In the first one, "Werewolf", Jim goes to his former home to make alterations for the family that lives there. While there, he finds the coffin of Count Cosmo Valdemar, and hears a legend that the Count turns into a werewolf hellbent on killing the widow living in the house. The truth, he will find out, is much more terrifying.

"Creeping Vine" is the second fortune, and in it, Bill returns with his family from vacation to their home. Bill's wife asks him to get rid of the vine that has sprung up seemingly out of nowhere, fearing it will overpower the hydrangeas. Instead of overpowering the other plants in the garden, the creeping vine has higher aspirations. Soon the family is trapped in the house, with a homicidal vine covering every window. It becomes a fight for survival between the plant and the family, with only one victor.

"Voodoo" is adapted from a story by Cornell Woolrich called "Papa Benjamin". Biff is playing a jazz gig in the West Indies, where he overhears a voodoo ceremony. Enthralled by the music, he decides to sample one of the songs in the ceremony. He ignores a warning not to steal the song, which belongs to the devotees of the god Damballah, who is portrayed as fierce and not taken to sharing his rituals with nonbelievers for the purpose of entertainment. Biff more than ignores the warning, even incorporating the high priest's mask into the background for his performance stage.

In "Disembodied Hand", Christopher Lee plays Franklin Marsh, a scathing art critic. He publicly humilates artist Eric Landor during a heated exchange at a gallery. Marsh, not to be outdone, hits Landor with his car. Landor loses his hand, and with it the ability to paint. He then kills himself. His disembodied hand seeks revenge.

"Vampire", features Donald Sutherland as a doctor returning to the United States with his French wife. They no sooner settle down when there begin a rash of strange killings. He enlists the help of his friend Dr. Blake, who helps him discover the true identity of the vampire. But that's not the end of Sutherland's problems, as he is soon betrayed by his friend.

I'm incredibly sorry that most of these descriptions are sparse at best. Despite the film's small running time of 98 minutes, each story is absolutely packed with great acting, fast-paced storytelling, and quirky twist endings. That's why I can't divulge the last story, "Epilogue", which is the wrap-around tale for the film. Suffice to say, it's absolutely brilliant.

I had never heard of this film until I saw it in my brother's collection, but I will say this much: this is exactly why I listen to all of his recommendations. I'm also pleased that I'm expanding my horizons when it comes to Peter Cushing and Christopher Lee, who until I started watching the old horror movies, were known to me only in their later careers. I'm not going to lie, films like this also cause a certain degree of melancholy. At the risk of sounding cliche, they just don't make horror films like these anymore. Straight-up storytelling with no gimmicks. Well acted. Decent production value. And well-written tales. I'm already sorry for the day I've seen all the older horror films I can, because it really is an experience to watch them for the first time with fresh eyes.
Christopher Lee Creeping Vine Damballah Dipper Disembodied Hand Donald Sutherland Dr. Terror's House of Horrors Epilogue Movies and TV Peter Cushing vampire voodoo werewolf