April 15, 2016
A friend of mine is a bit of a subscription box fiend. She does makeup boxes. Stationary boxes. Skin care boxes. Anything she can get her paws on. I was visiting her about a month ago and commented on the super cute sticker on her laptop. It featured a ghost wearing a monocle. She explained that it was part of a subscription set called Mister Ghost's Highly Enviable Monthly Parcel of Simple Yet Amazing Wonderments. Yes, it's a super long title for a very simple box. I opted for the subscription, which renews every month. That box goes for $12, but if you want to try it out and go on a monthly basis, it's $16.

I'm over the moon with what I received, but I don't think I'd pay $16 for it. But for $12? It's very much worth the money. It's a box suitable for younger people, as it doesn't contain anything offensive, but it definitely is more of a niche box than most. The skeletons, bats, robots, ghosts, cats, and other figures depicted are cartoonish rather than scary. But all in all the aesthetic is pleasant. It's produced by a company called Evil Supply Co. which sells stationary, stickers, patches, cards, and other like goods in addition to the box. (What you find in the box is exclusive - you can't purchase it separately.) The March box theme was "Magic Gardens". (I missed the February vampire theme.) I am extremely pleased with the offerings for April, and am already eagerly awaiting the May box, even though it'll ship on the 25th of this month. 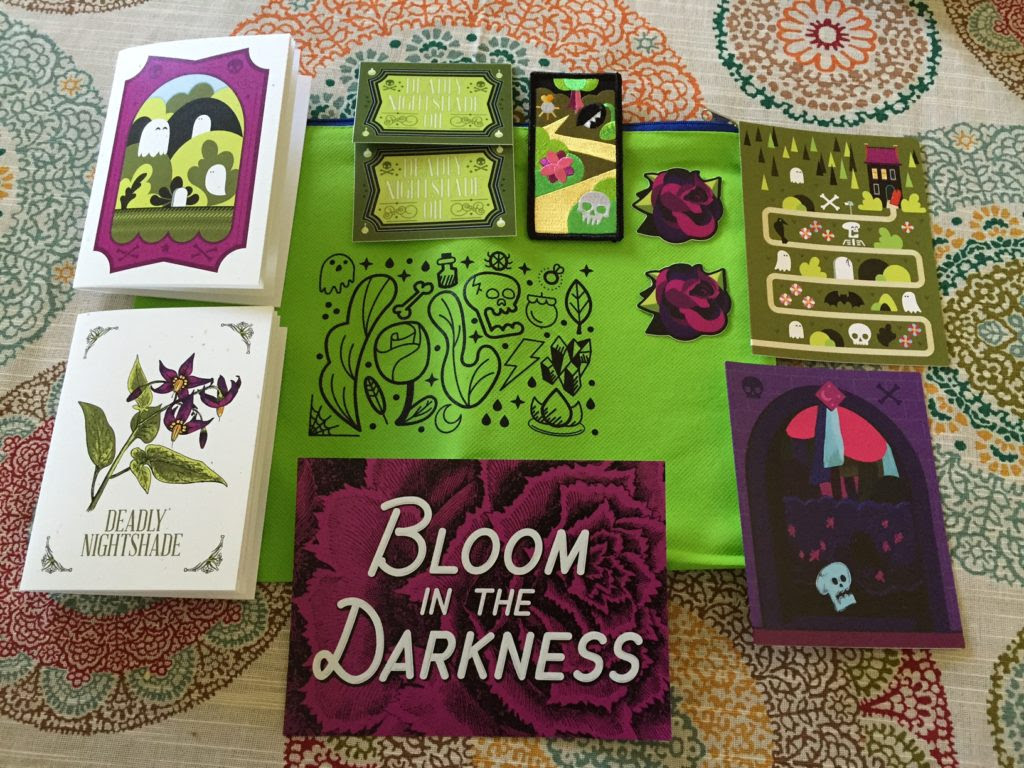 I will very happily continue to subscribe to this box. I think it's a steal for the price, even considering some of the items are better as gift items than things I'd keep for me. April's theme is "Bad Luck for Sale" and promises to be full of black cats and other familiars.
deadly nightshade Dipper Evil Supply Co ghost Magic Gardens Mister Ghost's Highly Enviable Monthly Parcel of Simple Yet Amazing Wonderments monthly subscription box Phoebe plants skeleton skull stationary