April 15, 2016
March's HorrorBlock just arrived in the mail today. (In case you're new to it, it's part of the NerdBlock family, and focuses on bringing unique horror merchandise to subscribers every month. Usually there's a theme, but lately they've chosen one or two movies or tropes and centered the box on that. It costs $19.99 per month.) Per usual, I waited to see Dipper before opening it, which incidentally meant that I had to wait until I was at work tonight.

This month's theme was again zombie-centered. After the letdown of last month's block, I was not looking forward to this one. As luck would have it, the second try was really the charm. This month's block was a delight to open. 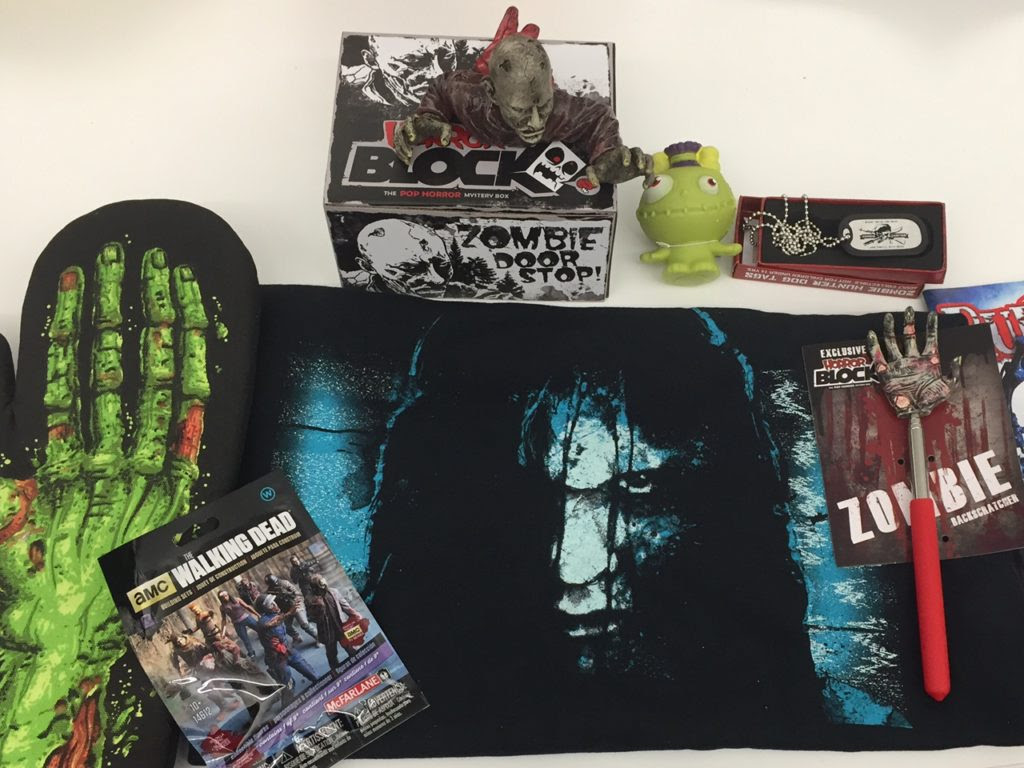 * Samara t-shirt - This month's t-shirt was a close-up of Samara from The Ring franchise. It's blue and white on a black background, and not bad at all. I was dreading what Ring merchandise would be included, as it's not one of my favorite films by any stretch. (It also doesn't stand up to a second watching, as all of the secrets are spoiled by the first viewing.) Dipper recommended that I give the shirt to our co-worker for his daughter, since she's pretty all-in when it comes to horror movies.

* Oven Mitt - I'm not gonna lie, I pounced on the oven mitt. I enjoy baking, and have been looking for a new oven mitt. This one is most likely going to be too thin to actually use with any sort of safety in mind, but the pattern is really awesome. The color green also goes with my current oven mitts, which are the same slime-snot green. I can't wait to hang this on the cupboard door above my stove! (UPDATE: Omg! It really works! I can use it without burning my hands!)

* Zombie Hand Back Scratcher - I'm not going to use that for it's intended purpose by ANY stretch of the imagination. However, having a telescoping zombie hand plaything is about the best thing you can think of in a cube farm environment. After taking it out of the packaging, I spent about 10 solid minutes terrorizing coworkers (and my unsuspecting supervisor) with it. The possibilities are literally endless!

* Zombie Squeeze - To me, he looks more like a voodoo doll, or a shrunken head with a body. But he's pretty cool just the same. When you squeeze him, you can see his brain stretching at his head to get out. It also makes a nasty kind of squick noise when you squeeze him. I suggested Dipper give this little ugly to his horror-loving daughter, but I have my suspicions that it's going to go to his personal collection instead.

* Zombie Door Stop - This was in a mystery box, and when we opened it, Dipper's eyes about boggled out of his head. I was over the moon that I already have a zombie door stop, because I really wanted to be able to give this item to him. When we divvied up the goods, this was the first item he chose. I don't think he'll use it as a doorstop because the guts are kind of delicate, but I think it'll look great on whatever table or shelf it winds up on. (I'm actually hoping his kitten menaces it, so that I can snag a picture of that!)

* Walking Dead Building Blind Bag - I had no idea these were a thing. I thought it was going to be some kind of Lego, but it's really a little figurine that comes in pieces. You put it together and then you have whatever character (or zombie). Apparently it's part of a set you can get where you build the pieces. I'm not going to track down the set, but it'll look pretty neat on one of my shelves. Preferably somewhere that my cat and dog can't get to it. It's a little small for them to safely menace.

* Zombie Dog Tags - These are pretty cool - not gonna lie. I'm not usually the dog tag type of girl, so they went to my husband. While not quite the zombie fan that I am, he enjoys his military shooter video games just fine. (He was pretty psyched when he got them!)

* Rue Morgue - It's taken practically everything that I have not to purchase this magazine before it arrived in the box. When Dipper and I were out in Barnes & Noble the other day, I saw the cover. Love me some Rob Zombie! Apparently he's got a new album coming out, so that is something I'll be looking forward to. Probably should put his other stuff on rotation again to make a comparison when the new disc drops.

Overall, I think this block made up for the last one, which was incredibly lame. They varied the contents, and included 3 exclusive items. I also didn't feel bad giving Dipper any of the items - when the block isn't as good, I can't escape the feeling that I'm giving him sub-par horror merch. And that is NEVER a good thing!

If you're still debating on whether or not to order this block, I'd say go ahead. The instances where the block isn't as good are few and far between, and usually even if you get one bum item per box, the rest of the merch more than makes up for it.
Chris Dipper HorrorBlock monthly subscription box Rue Morgue Samara The Ring The Walking Dead zombie zombies