February 20, 2016
All apologies in advance to Dipper, who is going to read this post soon after publication. (I can see the eye roll in my mind's eye.) Why the apologies, you ask? Because he rues the day he showed me this film. You see, Dipper and I bonded over horror movies and paraphernalia. It quickly became clear that I was not as up to date on all the horror movies that I should be. (Which will be the subject of subsequent posts - of which this will be the first.) 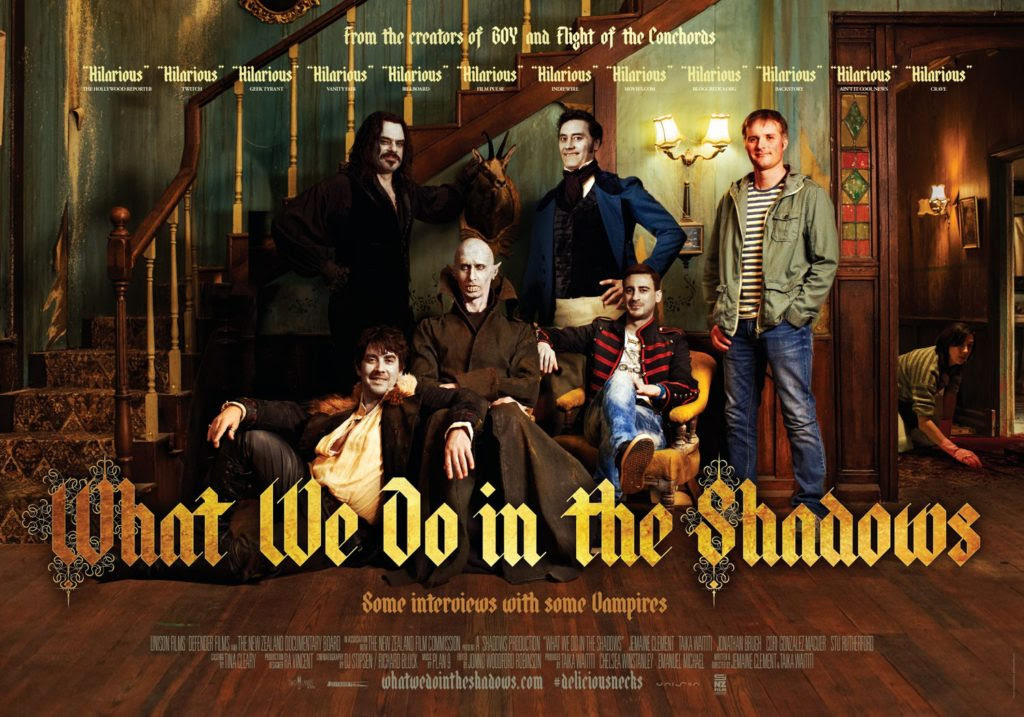 I have been absolutely positively stuck on What We Do in the Shadows since November/December. By "stuck on", I mean Dipper and I can't have a conversation with another human being where we recommend movies without it coming up. "Stuck on" as in my poor husband is sitting at his computer watching it with me on our TV while I write this post. It's really getting to be quite a thing. "Stuck on" as in we had a guest in from Kuwait and I flat out insisted on showing him this film. (Poor Pickells - though he did enjoy it immensely.)

That isn't necessarily unwarranted though. I've just burned them out on this movie. I will be counting for hours if I count all the ways that I adore this movie! It's a send-up of everything vampire. Nosferatu. The Lost Boys. Everything and anything vampire. The catch is that they're all really out of date, and each one is a caricature of a popular vampire stereotype. Petyr lives in an upright sarcophagus in the basement (he's Nosferatu-based) and they pass him chickens through the opening. Viago is my favorite. He's a dandy, based on Anne Rice's characters in Interview with the Vampire. Deacon is a Nazi Vampire, and if he is based on anything, it's nothing I'm aware of. That being said, he likes to knit and is very petty. Vladislaw is the Vlad the Impaler/Dracula mix. He thinks he's ultra sexy, and favors lap dancing.

It's also a send-up of housemate comedies, as the vampires are living together in a sort of vampire frathouse. The movie is a faux documentary, in which an unseen documentary crew follows the vampires as they go about their business. They hold flatmate meetings, have victims over for dinner parties, and attempt to go out on the town. No matter what they're doing, it's always one step away from a total disaster. There is not one competent vampire in the whole bunch. Despite a lifespan of several hundred years, they are not able to easily kill and drain their victims. They have "batfights" (a send-up of cat fights). And in general fail at everything they try.

Yes, I can almost hear what you're thinking. Trust me - this movie is worth it in every sense. It's by the people who ares responsible for Flight of the Conchords, and it's very reminiscent of Shawn of the Dead. They're lovable in their incompetence.

What We Do in the Shadows is a movie that bears watching multiple times. Each time you'll find a subtlety that you missed the first time, and that only adds to the experience. It's also a nice compromise for people who love horror, but have friends who aren't exactly into it. There's just enough general humor that anyone can appreciate it. (Unless their favorite movie is The Notebook - in which case there may be no hope for them.) My husband has seen this movie about four times and he's still laughing as I'm writing this post. It holds up to multiple viewings, and it's pretty much the greatest movie ever.
Ben Fransham Cori Gonzalez-Macuer Deacon Dipper Jermaine Clement Jonny Brugh Movies and TV Nick Petyr Taika Waititi vampire Viago Vladislaw werewolf What We Do in the Shadows