February 20, 2016
Everyone at my call center is obsessed with subscription boxes - most notably Loot Crate. Those items are hit and miss for me. I don't play most of the video games they reference, and some of the other nerd references are lost on me. Then, my brother Dipper mentioned that there's actually a crate for people like us - Horror Block. It's by the same people that do Loot Crate, but it's all horror. All the time. And let me tell you, it's fabulous!

Horror Block is $29.99 a month, but it's really a steal. There's always a t-shirt and a copy of Rue Morgue magazine, both of which will cost you more to buy separately than if you just get the box. Then there's always 3-5 other items included. Sometimes there's a cohesive theme, but more often than not they're just random items. Past boxes included Freddy Kreuger and Chucky plushies, as well as a really cool zombie hula girl that's supposed to go on your dashboard. (The hypnotic sway of those undead hips is quite distracting, so she's on a shelf in my library instead.)

Most of the items are awesome, but occasionally there are some that aren't quite my style. That's where Dipper comes in. He's an even bigger horror afficionado than I am (and has been showing me all the horror movies I'd been neglecting over the past few months). Sometimes items come in the box that either are more in his vein, or I look at it and just KNOW he has to have it. 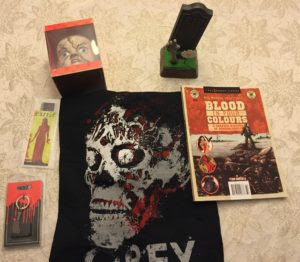 January 2016 was an exceptional block. The Rue Morgue magazine centered on horror comics - which is something I am definitely interested in experiencing. Additionally...

I can't wait to see what the next Horror Block will bring, but it's due to come soon. It's literally like a little slice of Christmas every month. (Except everything in the box is awesome, either for me, or my brother.) I'll keep you up to date on the next block, and all other blocks thereafter! And if you're serious about horror, it bears repeating that you need this unique subscription.
Baby Eat You Alive Carrie carrie film cell bookmark cleaver keychain gravestone cell phone charger Horror Block John Carpenter Loot Crate Rue Morgue They Live