Folks, we've got a situation here... 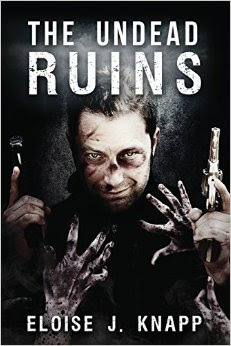 Cyrus V. Sinclair is back with a vengeance. Sort of.

Cyrus and Blaze have been building a comfortable life for themselves as mercenaries for the three settlements. They deal harsh justice, as well as take care of the more uncomfortable tasks required by the settlers. During this time, Cyrus begins to change. He begins to have a conscience. And with that comes crippling guilt. Blaze still doesn't know the truth about Cyrus, or her brother. Deciding whether or not to tell Blaze is a crippling decision. But with an old enemy emerging and more dangerous than ever, Cyrus just might find himself in a situation he is totally unprepared for.

I am always excited to get the chance to read another book by Eloise J. Knapp. She knows how to write complex characters and engaging storylines. She also intrinsically knows that the most important thing about writing a trilogy is to wait until the right time to release it. She didn't rush with the books in the series. Each book is a perfect compliment to the others.  The Undead Ruins is no different. Knapp once again delivers a solid book. The plot is engaging, and there is the right mix of character development and action.

To cut to the chase, I absolutely loved this book. I tore through it in a matter of days because I couldn't put it down. It was so much fun watching Cyrus struggle with his newfound conscience, something he had always believed was beyond him as a sociopath. I also enjoyed Blaze giving him several well-deserve ass-kickings. And every time I thought that Knapp couldn't push further, she did. The action in the book was neverending, and the ending was like something out of a Sylvester Stallone action movie, but without the cheese. If you haven't begun the trilogy, do it RIGHT NOW. Purchase The Undead Situation and follow it up with The Undead Haze. Then, go to The Undead Ruins. And when you're done, go find all over Eloise J. Knapp's other books, because she never disappoints!
Blaze Wright Cyrus V. Sinclair Eloise J. Knapp Literature Permuted Press The Undead Situation