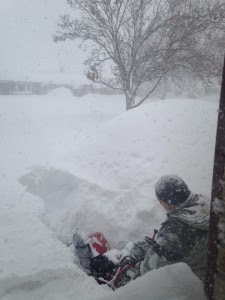 Yesterday it was rain-slushing. There were puddles of water in the streets, and melting snow on the grass. There were people raking leaves, and everyone was wearing hoodies and fleeces. Last night the snow started a little bit more in earnest.

The flakes fell a little bit faster, and stuck on the ground longer. This morning when Chris and I woke up, we were in the process of being snowed in. Now it's 2 minutes shy of 3pm, and snowed in we are. Neither of us went to work, and most of my coworkers called in as well. There is a driving ban for all points starting in South Buffalo. (Chris and I live in what is known affectionately as "The South Towns"). A few hours ago, Chris tried to go and chew us out of the snowdrift. Yeah, that didn't happen. We don't have  the ability, and more snow keeps falling. The photo to the left is Chris making an attempt. About another foot has fallen since then.

Let's make the most of it! Chris and I are working our way through our series (currently catching up with American Horror Story), and drinking hot cocoa. As far as I'm concerned, we have food in the house, and the power is still on, which means my zoo survives (orchids, snakes, and fish).  To be continued...

...it's 8:15 the same night. The snow has continued falling. Chris and I went out to uncover our exhaust pipe for our furnace, because high efficiency furnaces are notorious for getting covered and causing carbon monoxide poisoning (so keep yours clear!). We barely made it around the front of the house. I was climbing over the snow drifts and using my shovel to balance my weight out (like a freaking crab.) We will try again tomorrow, and tomorrow there will be more picks.

For those of you who might be snowed in (or just want to pretend you are), here are my picks for a fun snowed-in day (or week, as this isn't supposed to let up until Thursday or Friday): 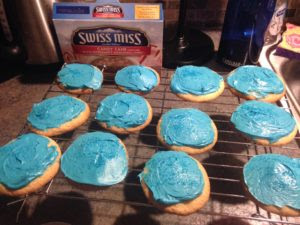 1) Candy Cane Hot Coca - Oh man! This stuff is the bomb. It takes about 2 packets to make a decent cup, but it's great. Highly recommended!

2) Snowcone Cookie Mix - The flavor is blue raspberry. And they're amazing.

3) Z Nation - If you haven't been watching this, well, get on it! It's a really great show. It's pretty traditional, but has some really poignant and funny moments. Plus the characters are multi-faceted. That's always a bonus.

4) American Horror Story - My personal favorite is Season 1, but Season 4 is picking up nicely.

5) The Thing - Both the John Carpenter version, and the "prequel". Either works just as well - even though I will always have special love in my heart for the original. (Go, MacReady, go!)

6) Dreamcatcher - So sue me! I freaking LOVED the movie version. The book was ok, but the movie kicked some serious ass! (And it starred Timothy Olyphant, which never hurt anyone.)

8) The Shining - Yes, you knew that was coming. A classic tale of being snowed in, and the damage an alcoholic can do when influenced by bad spirits.

9) The Mist - Ok, ok. So not a snow movie, but creepy as hell. And, if you're from Buffalo like I am, the wall of white outside the window doesn't really matter does it. Mist, snow. It's white and you can't get through.  (Oh, and Thomas Jane is spectacular in this one! Not to mention three Walking Dead alumni are in it - Carol, Andrea, and Dale.)

Whatever you're up to, and wherever you are, be safe and be warm. I'm off to watch some TV with the husband, and then get my crochet on. Afterwards, I might keep reading a really awesome book - The Undead Haze, by Eloise J. Knapp. My favorite literary sociopath, Cyrus V. Sinclar, is back at it again. As an added bonus, he's slogging through a winter wonderland too. (If you're new to the series, start with The Undead Situation first!)
30 Days of Night American Horror Story Buffalo Candy Cane Hot Cocoa carbon monoxide poisoning Dreamcatcher Eloise J. Knapp FX Lake Effect Snow Laurie Holden Melissa McBride Snowcone Cookie Mix SyFy The Shining The Thing The Undead Haze The Undead Situation The Walking Dead Timothy Olyphant ZNation