November 08, 2014
House of Horrors and Haunted Catacombs used to be two separate haunted houses. They joined together to bring people an enhanced scare experience, and in many ways, that's worked 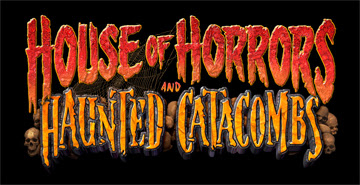 great for them. This is another house that Steve and I try and visit every year. Sometimes the houses change, and some are the same title and theme from year to year, but with noticeable differences.

One of my favorite things about HoH and HC is the interior decoration, before you even get to the haunted houses. They have an animatronic torso that is suspended from the ceiling by two chains that it holds. It whips its head back and forth and see-saws with the chains. In the low colorful light it almost looks real. This year, a guard post was added with zombies and human dummies, which was a nod to their two Walking Dead themed haunted houses. On a big screen commericals for old horror and sci-fi movies play. If you're not careful, one of the myriad fiends in costume will sneak up on you, or you can take a picture with them for free. There is also a concession stand for candy, popcorn, and soda.

Steve and I started with Killer Theater, which was a favorite from last year. The premise is pretty basic - you go from movie set to movie set. You encounter Michael Myers, Freddy, Jason, and Leatherface. Last year included Pinhead, complete with his spinning pillar of body parts. This year, thankfully, Leatherface was without his chainsaw. Say what you will about me - I'm fearless until the chainsaws come out! Killer Theater certainly didn't disappoint this year either!

We went through Zombie Apocalypse Paintball, which was like walking through a Resident Evil set. At two different points, we were instructed to walk up to a window where we could shoot zombies wandering back and forth. Pretty fun - not exactly what I expected. When another visitor accidentally shot me in the back with the paintball, I understood why there were designated shooting spaces! It sucked being shot without armor! Overall, it was a very interesting house.

Dragged into the Grave was extremely disappointing. The facade was a tomb, complete with a leering gargoyle larger than a grown man. It was very realistic and intimidating. And it led to - nothing. Absolutely nothing. The entire house was a dark maze. It didn't even have any actors. Fumbling in the dark quickly became tiresome, and when it was over I was pissed.

The Walking Dead: Prison Break and The Walking Dead: Escape From Woodbury were both pretty cool. They closely mirrored the television series. Prison Break featured a walk through the prison where the characters made their home in the TV series, complete with Rick and Carl statues. Escape from Woodbury had Michonne, Rick, Carl, and even the Governor, with his aquariums full of heads. It wasn't so much scary as it was really cool to walk through what felt like scenes from the movies.

HellHouse was, by far, the best. And it always is! It's not analogous to the Richard Matheson masterpiece, unless you go by the fact that both are haunted houses. The facade is the most highly decorated, and looks like an old Victorian house. The inside is also the most well-furnished. There was an animatronic demon-head goat-monster that reached out to bite you on your way out. There are was even a child's room filled with creepy dolls galore, and the kitchen. Oh man the kitchen! That's where my nightmare man with the chainsaw was waiting.
animatronic crazies Dragged Into the Grave Freddy gargoyle Haunted Catacombs Haunts HellHouse House of Horrors Jason Killer Theater Leatherface monsters The Walking Dead: Escape from Woodbury The Walking Dead: Prison Break Zombie Apocalypse Paintball zombies