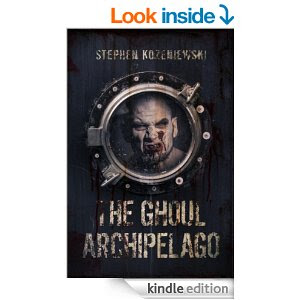 It’s a great time to be a zombie fan! Newcomer Stephen Kozeniewski wows with his latest, The Ghoul Archipelago, recently released by Severed Press.  At it’s most simple, The Ghoul Archipelago tells of a power struggle between three men after the zombie apocalypse. One wants to convert everyone to his relgion. Another wants to be the lone military power. The third wants to extend his sphere of economic influence. Still sounds pretty simple right?

But wait! Let’s add in the wild cards, shall we? A crazy smuggler captain named “Howlin’ Mad” Martigan. And his miscreant band of sailors. A local ruler, the Rani, who has the mouth of a 13 year old boy, the wisdom of Princess Diana, and the charm and wit to quickly become one of the most interesting characters in the book (though she isn't in it for very long). A collar called the Sex Drive, which allows the wearer to delve deep into their most forbidden fantasies all at the push of a button. Eve Smith, the only woman who can wrangle her boss’ irresponsible tendencies, and is the spine, brains, and heart of Sex-Drive Multinational. Don’t forget Tuan Jim, who is loyal to no side but always winds up in the right place at the right time. Last but not least, we have the Lazarenes – a slavering band of zombies that reside in the reverend’s church, as “living proof”of God’s promise of everlasting life.

Kozeniewski’s tale reads like a Discworld book, with all the humor and astute observations of the world we live in. The characters are real for their sheer absurdidty, and I would be willing to be that the reader can identify with most of them, having spent time with their real-life counterparts. I know I can. (And if any of you happen to have ever been to a LAN party, you’ll most likely find the Captain and his crew seated behind the computers around you!) Don’t get too attached though, Kozeniewski also shares George RR Martin’s ability to introduce and kill characters on a whim. No character is safe, and the person you think is the main character, I guarantee it’s not. As far as I could tell, there was no main character, and it made the story infinitely more interesting because Kozeniewski could spend time developing all the characters equally. My favorite kind of book is one in which all characters are so realistic, that I feel any one of them could be based on a real person. I love guessing who the main character is, who is on the author's kill list, and who isn't going to survive another paragraph. Kozeniewski definitely doesn't disappoint!

The Ghoul Archipelago is a really interesting book. Before I knew what hit me, I was already at the end and wondering when a sequel would be coming out. That’s not to say that the book was incomplete, because it wasn’t. It’s just that I can't wait to see what will happen to the survivors next, and what kind of world they’ll chose to build for themselves in the future.
Discworld George RR Martin LAN party Literature Princess Diana Severed Press Stephen Kozeniewski The Ghoul Archipelago