July 30, 2014
I am normally the kind of person who can (and does) read multiple books at the same time. Usually I have a book that I'll take to work or out and about with me, a book that I might read if I'm relaxing in the bathtub, and a 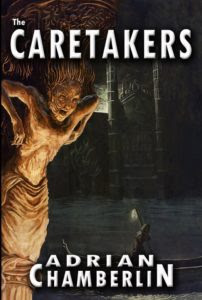 book that I read before bed (which is usually the book I'm focusing on reviewing). That all changed when I picked up Adrian Chamberlin's The Caretakers. What a roller coaster ride! The story is complex, intriguing, and utterly insane from the jump. It absolutely demanded my sole attention, and then proceeded to keep it throughout the entire read.

And it also made for a hell of a review subject.

The plot is utterly unique, and centers around a vengeful and terrifying goddess named Andraste. In order to keep her from bursting into our world and destroying everything, a group of people need to offer up a sacrifice every year. This isn't your garden-variety sacrifice though, it makes Mayan sacrifices look like a Sunday school picnic. Andraste demands that her tributes suffer total agony and a slow death. The ground of All Souls College, the location of the ritual, is guarded by animated dead boars, known as the Children of Andraste.

Chamberlin creates and maintains tension throughout the book between Andraste's devotees and a rag-tag band hell-bent on preventing this year's sacrifice and putting an end to Andraste once and for all. At first, the unlikely heroes have trouble working together. Memories of an incident they were involved in at a college bar years ago are still too fresh, and their purpose together is too unclear for them to form a strong bond. Unlike most literary heroes,  each one has their shortcomings. Andy has a terrible, black temper. Rob is fond of mind-altering substances. Phil is full of himself and self-righteous. Jason is fiercely intelligent, with a destructive side.

For a long time, I couldn't decide whether I was more impressed by the plot or by the characters. It's still a rough decision, but I've decided that the characters steal the show. Chamberlin's characters are realistic. They have their flaws, and there really isn't a "good guy" or a "bad guy". There's just people, doing the best they can with what they know and what they believe to be true, and that's pretty much any and all of us ever do. Chamberlin avoids stereotypes with his characters, and every page brings the reader new surprises about the characters.

I can't say more about the book than I already have, which is a shame, because I could gush about it all day! I don't want to spoil the intricate plot for any reader, because Chamberlin kept me guessing every step of the way. Just when I thought I had it figured out, he tossed me another crumb. Just enough to keep me guessing, and salivating like Pavlov's dogs. Not to mention, no character is safe. He killed off my favorite character! Actually, BOTH of my favorite characters. (Really, Adrian?! You know I won't forgive you for that!) I read the 5-page Epilogue three times, and then burst into tears. I cried steadily for about half an hour. Then I wiped my eyes and re-read the Epilogue. (If you're wondering - I cried again. So sue me.) Chamberlin knows how to write an amazing ending to an amazing story! I never saw it coming, but it fit perfectly.

Adrian Chamberlin's The Caretakers has made it's way into my absolute favorites list, because his plot is as fresh as a newly dug grave, and his characters are realistic. I highly recommend this to anyone - fans of horror, fans of mystery, and (forgive me, Adrian) fans of tasteful, not all-consuming romance subplots. Basically, if you don't have this book - YOU NEED IT. So go and buy it. NOW!
Adrian Chamberlin Andraste conspiracy cult Dark Continents Publishing goddess Literature ritual ritual sacrifice sacrifice The Caretakers The Green Man